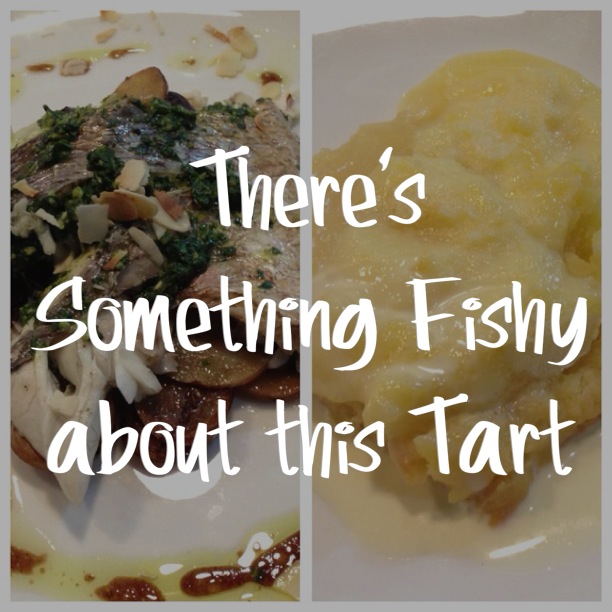 Thanks to the lovely Mel from The Cooks Notebook, this weekend I won a cooking class at the Good Food and Wine Show in Brisbane. Since I had no other plans, I jumped online to buy my entry ticket and happily spent Saturday in foodie heaven.

Tip #1: Bring a bag to put your goodies in. There are so many brochures, competitions and freebies that your handbag will become overloaded very fast.

I arrived about half an hour before my class, so I quickly did a loop of the show to see what was around. There’s a lot! For some reason I didn’t pick up a stall guide on the way in, so I was wandering aimlessly all day. Having said that, wandering aimlessly surrounded by food and wine isn’t really the worst thing in the world. 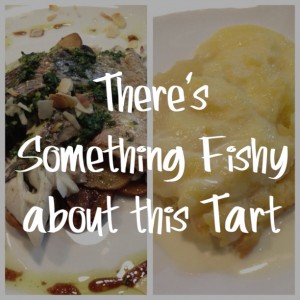 Tip #2: Go to cooking classes with someone you know. It’s much more fun to cook with friends than strangers!

I dropped by the Fisher & Paykel stand (the show is also about appliances, but only select brands) to pick up my free ticket. The lovely Ivana gave me my ticket and walked me to the kitchen to see what we were learning to cook that day. It was enough to make me hungry: Whole Fish with Potatoes, Basil, Garlic, Fennel & Olives as the main, with a Baked Lemon Tart for desert.

After an introductory run down of the meals, the kitchen and the multi-tasking, we got down to it! The first thing we did was prepare the pastry for the lemon tart. As we don’t eat this kind of thing at home, I had never tried making pastry – it sounds a bit silly in hindsight, but wow so much butter and flour! Heart attack in the making!

It took a lot of hand mixing to get the butter mixed in with the flour – the butter was cold and did not want to mix. After this, we added the icing sugar, lemon zest and egg yolk, rolled the pastry up and put it in the fridge to set.

Then it was on to the main. First to be tackled were the kipfler potatoes – finely diced, then to get them started (as they take longer than fish), cook in the oven pan, but on the stove top! 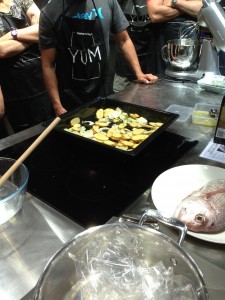 Tip #3: Cook potatoes faster than the fish by frying them on the stove top until they’re soft.

At the same time, the fennel, garlic, balsamic vinegar, thyme and olives were put in the pan, creating a base for the fish. Before the fish went in, 2-3 deep cuts (to the bone) were made – reasons for this became clear later.

Once the fish was in the oven, we swapped back to the baked lemon tart. Now it was time to create the base and fill it. Instead of using a baking pan, we just used the smallest saucepan on hand.

Tip #4: Spread the pastry out evenly in the pan so that it will hold the weight of the filling. 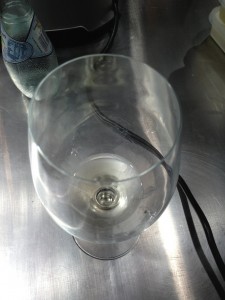 We started on our first glass of wine while we were learning about the filling – all wines were Grant Burge. I think the sparkling we had was the Pinot Noir Chardonnay.

The lemon tart filling included 9 (!) eggs, tons of sugar, a lot of lemon juice, and a ton of cream. Once again, I’m clearly a baking/tart novice, but wow! Then it was oven time. Ours was strained on the way into the oven to stop bubbles. 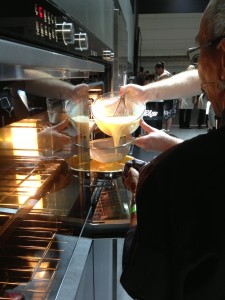 By this point, the oven timers were going off and we were nearly ready to eat!! 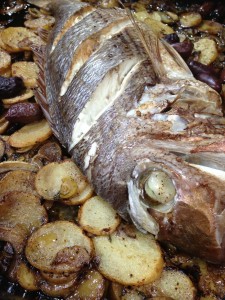 Tip #5: The cuts to the fish allow both heat in when the fish is in the oven, and for you to visually check that the fish has been cooked thoroughly.

Then we had a quick serving lesson:

Tip #6: Use the cuts to the fish to scrape the flesh off the bone for serving.

And then it was time to EAT! We followed our wine glasses and plates into the dining area and put our skills to the ultimate test – the taste test! 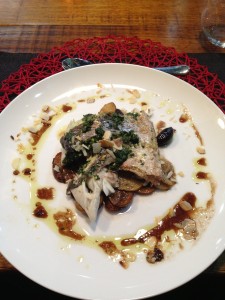 The fish was paired with another wine, I think it was the Sauvignon Blanc Semillon. I liked that wine a lot! The fish and potatoes were cooked wonderfully – my only gripe was the same I have with any whole fish – BONES! It’s damn pesky to be talking to new friends and then fishing (pun intended) around in your mouth for that bone you just bit down on. I’m not a fan of vinegar, so I found the balsamic too strong, but that’s the sort of thing you can easily omit or reduce the quantity of when you’re cooking at home.

We actually didn’t get to learn how to tell when the tarts were done, as they were in the oven while we were eating the fish. 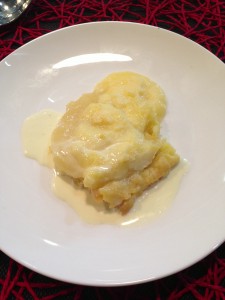 But I can tell you the lemon tart tasted good – far too sweet for me but I managed to eat it. After all, I had to try my best! This was paired with a Moscato, which usually I find far too sweet. As the tart was very sweet, it made the moscato taste less sweet and I liked it more than usual.

Shortly after we had eaten, it was gift bag time & we were sent on our merry ways – after all, another class was about to start!

Oh, and if you’re wondering about the name of the blog post… I went to catch up with some friends who were also at the show after my cooking lesson. Naturally, they asked what I made in the class. “Fish and Lemon Tart” was my reply. I think I said it a bit too fast, because the words came out and implied it was one dish.

As my friends are in “the biz” I spent some time with them as they did the rounds of stallholders they knew. Then we went our separate ways and I headed to the cheese alley. Unfortunately, though not surprisingly, it was packed there, and I didn’t get a chance to try the cheese from a few companies I wanted to.

Shortly after, I saw my first drunk person and thought it might be time to leave.

Tip #7: Don’t wear a white shirt, have a wine glass lanyard and drink red wine. It will end badly.

Did you go to the Good Food and Wine show in your area? And more importantly, are you brave enough to make a fish and lemon tart (in the same dish)?

11 Replies to “There’s Something Fishy about this Tart”