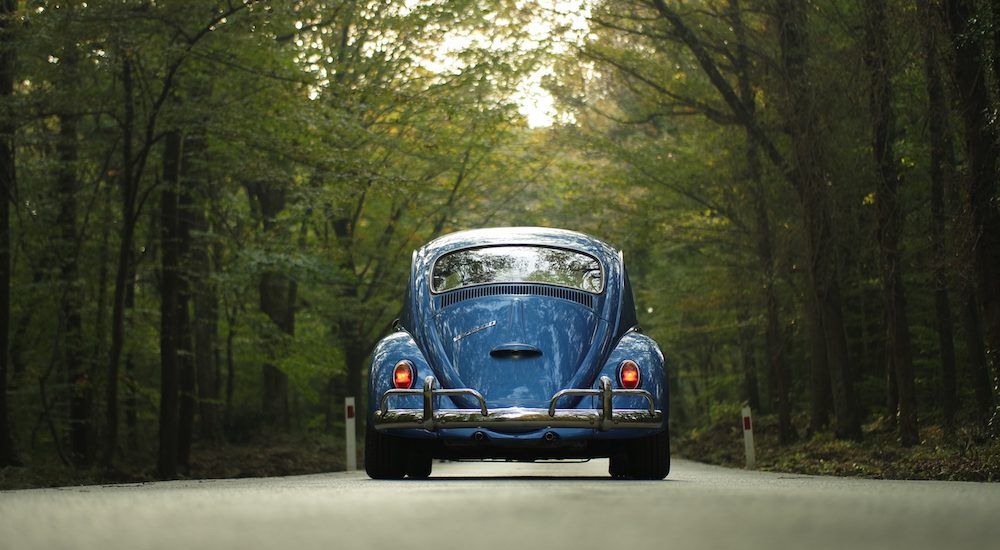 As you may know, I’ve had the joy of being sick all of 2017. With the stitch gone, I finally started feeling slightly more human. Yay. Only then I realised that I was heading full speed into my busy cycle at work. As 99% of Brisbane does, I decided to take advantage of the Ekka Wednesday public holiday and make a 5 day weekend. I would have made it a 9 weekend but I didn’t have enough leave! Stupid being sick! Still, two days of leave making a 5 day weekend is hardly shabby. Due to electricity bill, rego and drivers licence being due I made the “choice” to make this a staycation. That money tree in my backyard hasn’t paid off yet… 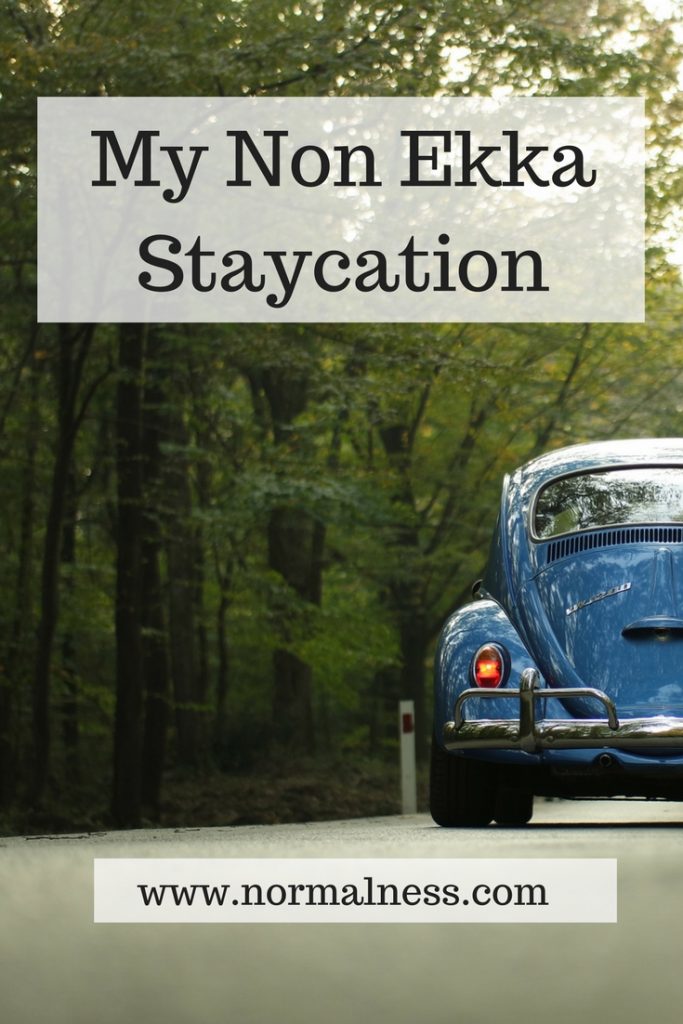 My leave was only approved on Friday, so I didn’t do my “set up” for a long weekend. Basically, clear shit up so the house isn’t a dump and feels slightly vacation-ey. But oh well. You can only work with what you have, and what I had on Friday was a hamper full of a work week of dirty clothes. Which I ignored, because I deemed this a holiday and no one does washing on a holiday.

I came home to a letter from Clare. Yay for snail mail. I’m still a bit lost as to what to do after work and such things like that, so instead of going straight into the letter, I decided to save it for reading when I had the time to sit and really read it, rather than on a Friday dinner hunger rush.

We decided to eat breakfast at the beach – and by the sounds of it, should have gotten up earlier to see the fog! But even so, it lingered so much that you couldn’t see Moreton Island. Very strange. 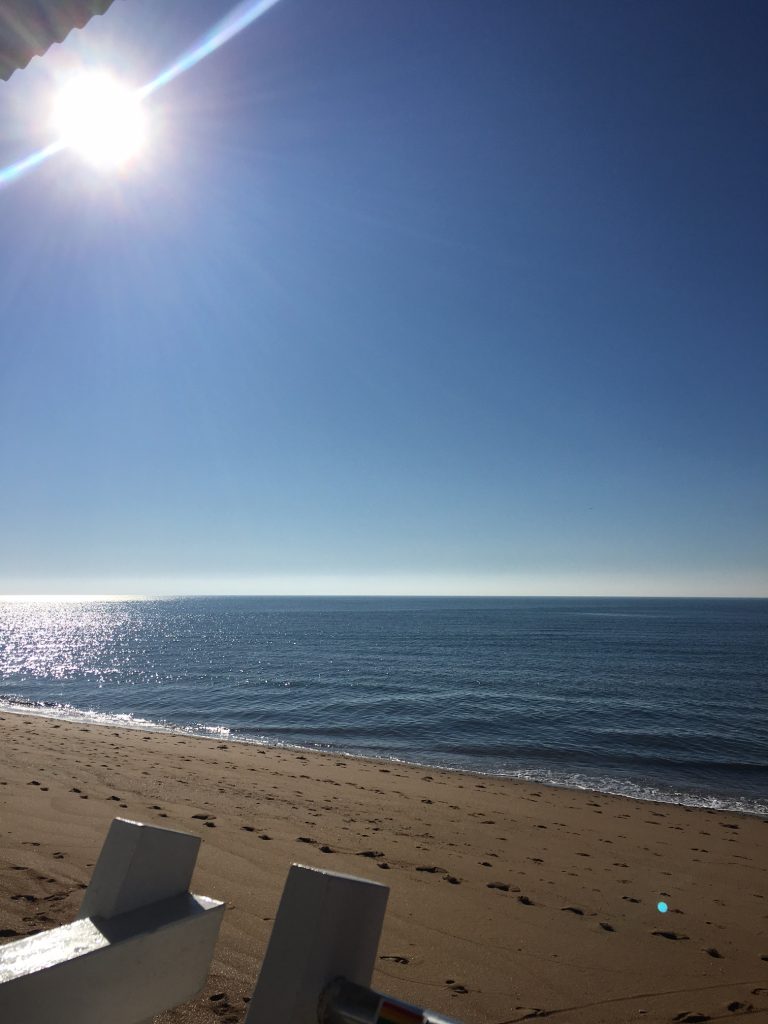 After we’d eaten, we went to one of our favourite op shops. Some of them are so expensive these days you might as well shop new; but this is one where you can buy ok-ish couches and perfectly good coffee tables for about $20-30. I’ve gotten some Ikea stuff there in the past too – a $90 desk chair for $3, a $120 cube cabinet for either $10 or $15 (can’t remember now). And it all looks just as brand new as brand new. I call it a proper op shop! It’s really good for anything household that you want to replace for basically no money. Ben found a shelf type he’d been looking for – again, a total bargain for $15. The castors it’s on are super heavy duty and would be pretty expensive just for those parts alone.

We stopped at the egg farm on our way home; total bargain. We get a tray of jumbo eggs (3 dozen) for $11. And they last for-ever. And it almost feels rural. 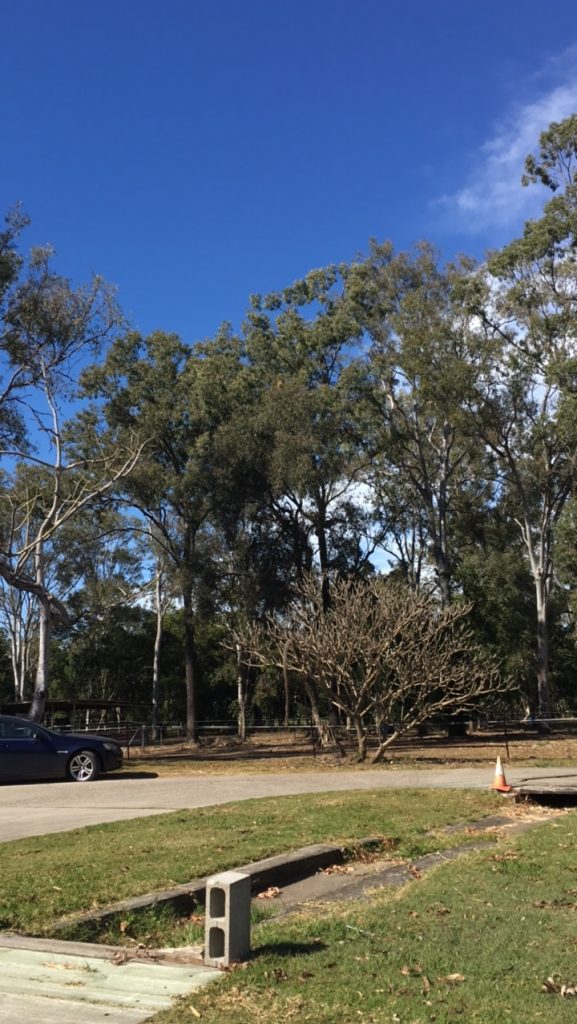 I then decided to tackle something bloggy – I use ViralTag to schedule shares of my old blog posts and it was a bit of a neglected mess. So I deleted everything, and re-scheduled nearly every blog post I’ve ever written. It took about 6 hours all up – but that included lots of loud singing and a trip to the doctors, chemist and Dan Murphys. (2018 UPDATE: I no longer use or recommend ViralTag.)

Because, oh yeah, I decided if this is a staycation and I’m well again, I can have wine! Yay! After not having had alcohol in who knows how long (possibly all year so far) 1.5 drinks in 1.5 hours made me incredibly sleepy. My current wine is this cleanskin Cabernet Merlot. It’s $4 and tastes a darn sight better than most $40 wines I’ve ever had.

I woke up even earlier than I do on a work day, and not even by the use of an alarm. So I woke Ben up and asked if he wanted to come with me and watch the sun rise. It was very pretty: 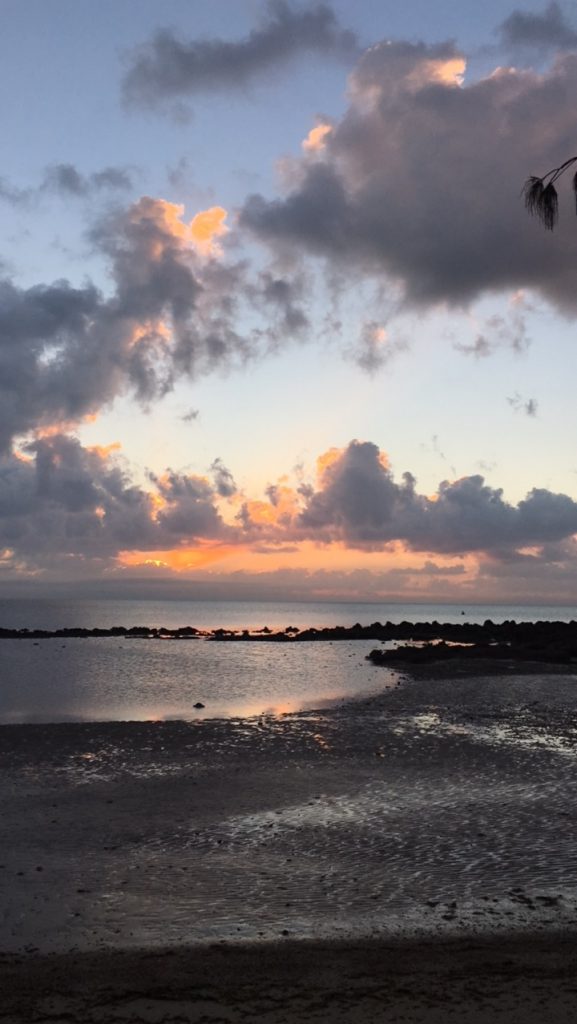 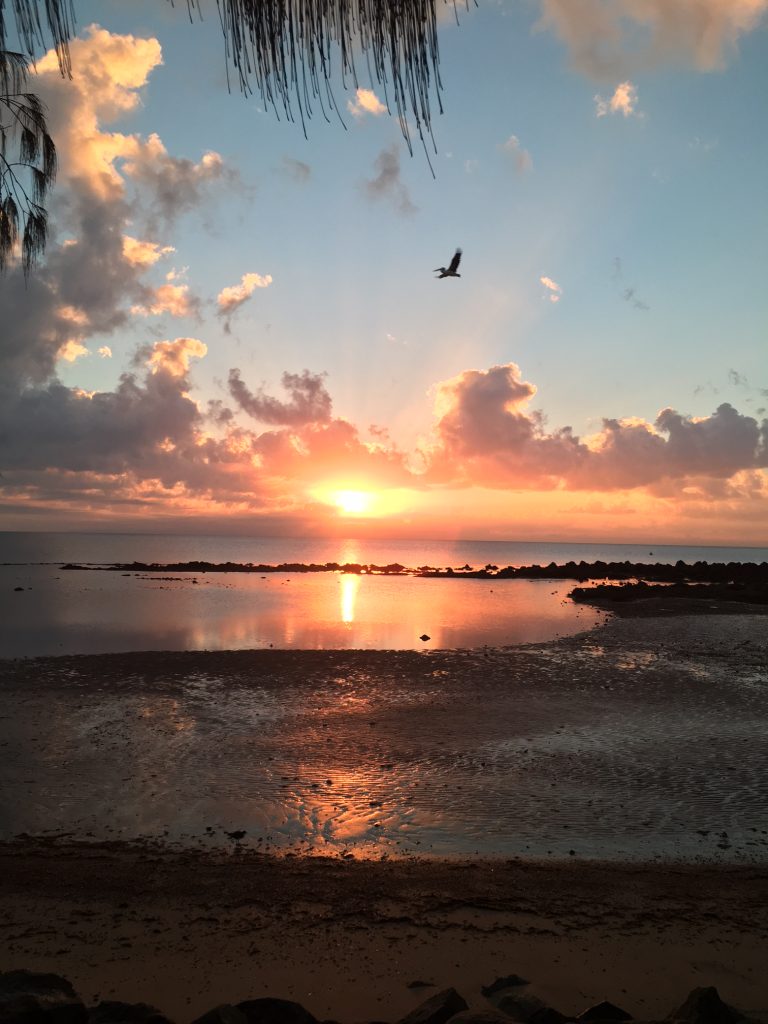 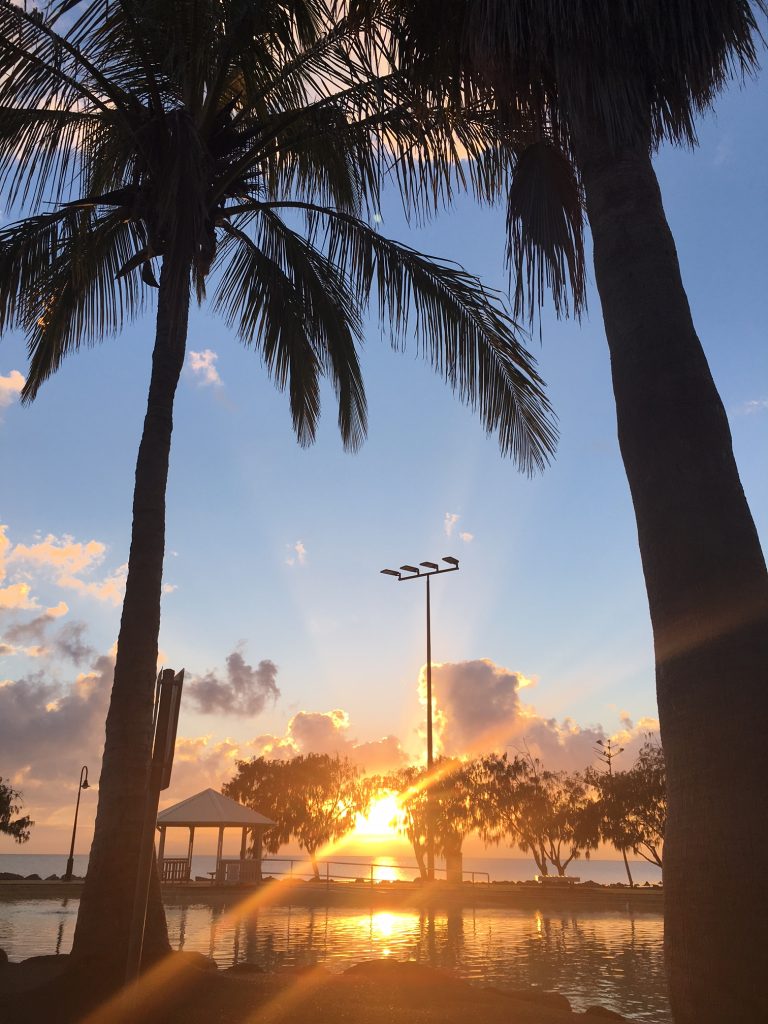 I pretty much did nothing useful the rest of the day. Played some games on my iPad, watch some Parks & Rec, pretended to help Ben give Vala a bath, copied some photos onto an external hard drive…

After starting out with some toast and tea at home (rare treat to eat food at home, on a work day I’m get up, get dressed and run away in as little time as possible) we went to investigate the existence of a new bouncy pillow in a local playground. Every time I’ve been near one in my life, it has been raining and I’ve been unable to jump. The height of unfairness. Anyway, I found the new one in a public park but didn’t get to jump on it. It was a public holiday so kids were hanging out on it being “cool”. Decided to go back on a day kids are at school.

Apart from this summer just gone, we often have BBQs and things in our local beachfront areas so it’s not often there’s a feature I don’t know about…after keeping on walking once we’d found the jumping pillow we found this door in one of the trees! 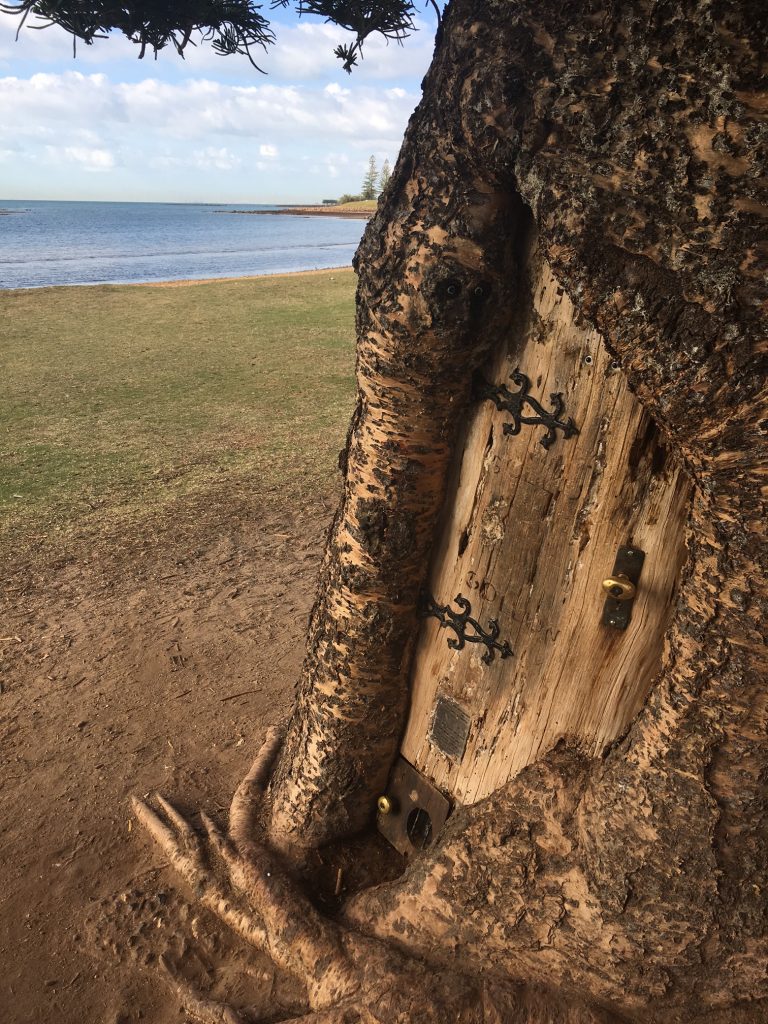 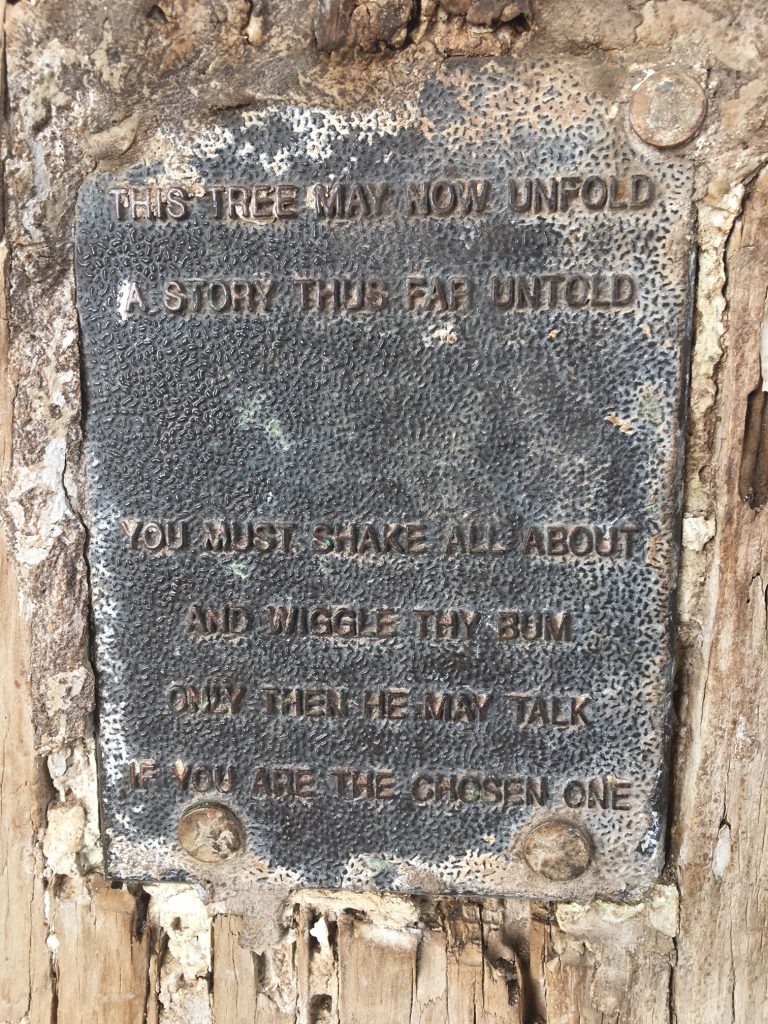 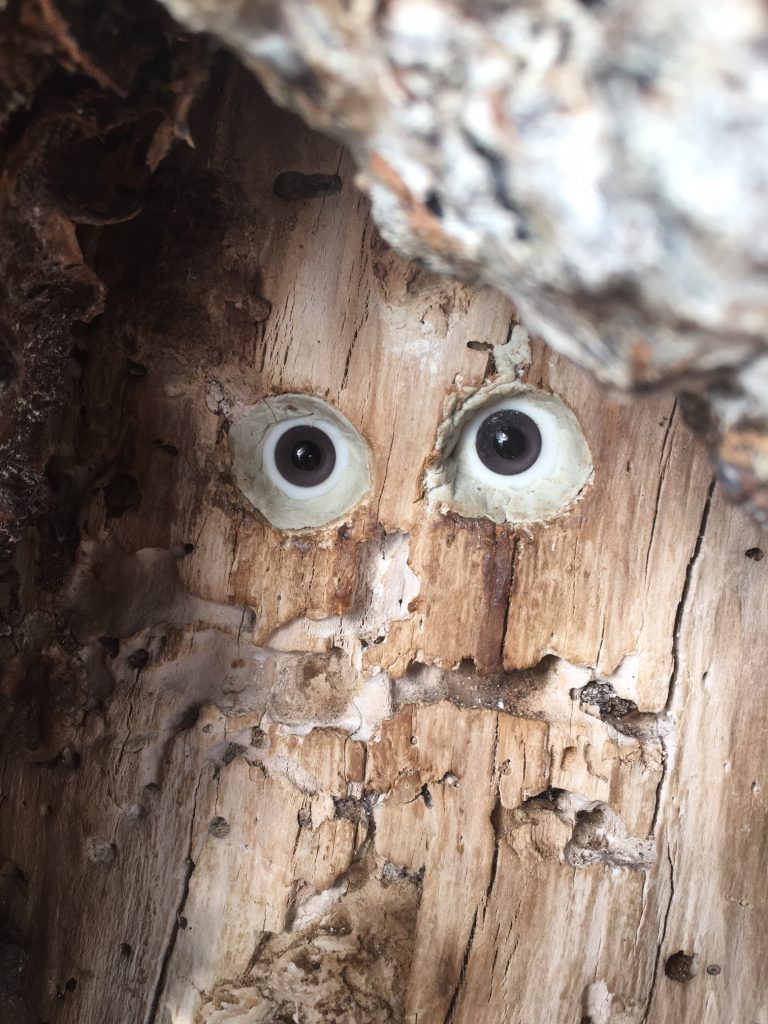 After another short walk elsewhere, we went home and I kicked Ben’s ass at MarioKart. Then… I had nothing to do. I ate some cake. I stared at things… then I decided to redo the living room. Yep. Just a small decision. I want to fit an exercise bike inside so I can slowly build fitness again. We have a bike stand adapter thingy (NFI what the proper name for them is) so we just need one of our bikes to not be totally rusted and spider infested from being outside and unused for years, and we can put it inside to cycle in air con. Very important in summer!

So most of the rest of the day was pretty much that. Clearing things out of our old, giant cabinet. Deciding if things would fit. Calling Ikea – the $20 cabinet I wanted said out of stock on the website but the store said they had 40+ in stock… so I honestly have no idea what we’ll find when we get there! Deciding what needs to go to the dump, what we can store, what we can take ourselves and what we’ll need to get a family member with a trailer to help us with. And of course clearing out the old long-line TV cabinet. And finding out that I had left batteries in the Wii Fit board and yeah…that went in the bin. Very much leaked battery mess. Now I need to buy a new Wii Fit board when I have some spare cash. Thankfully I don’t think they cost too much these days.

Early morning = Ikea. Well, not really that early. But basically I will only go to places like Ikea in the first hour or two that they are open, otherwise people ugh. I don’t like crowds or shopping centres. I rarely buy furniture at Ikea so I park anywhere at the shopping centre, but this time I figured I should park close so we don’t have far to go. I somehow got lost trying to park close, did a 360 around a roundabout, and ended up choosing somewhere random to park. And guess what – I came out exactly where I had wanted to! Score! We did spend some time wandering aimlessly through the fake set up rooms before we came to the TV stand/coffee table area. The TV bench we wanted to buy looked utterly minuscule in the store! But we had measured the dimensions out before we went there, so it was just a perspective thing. Well, mostly. It is about as small as a TV stand can get, but that’s what we wanted.

Also, for the fellow Firefly fans, “It was the Pax”… 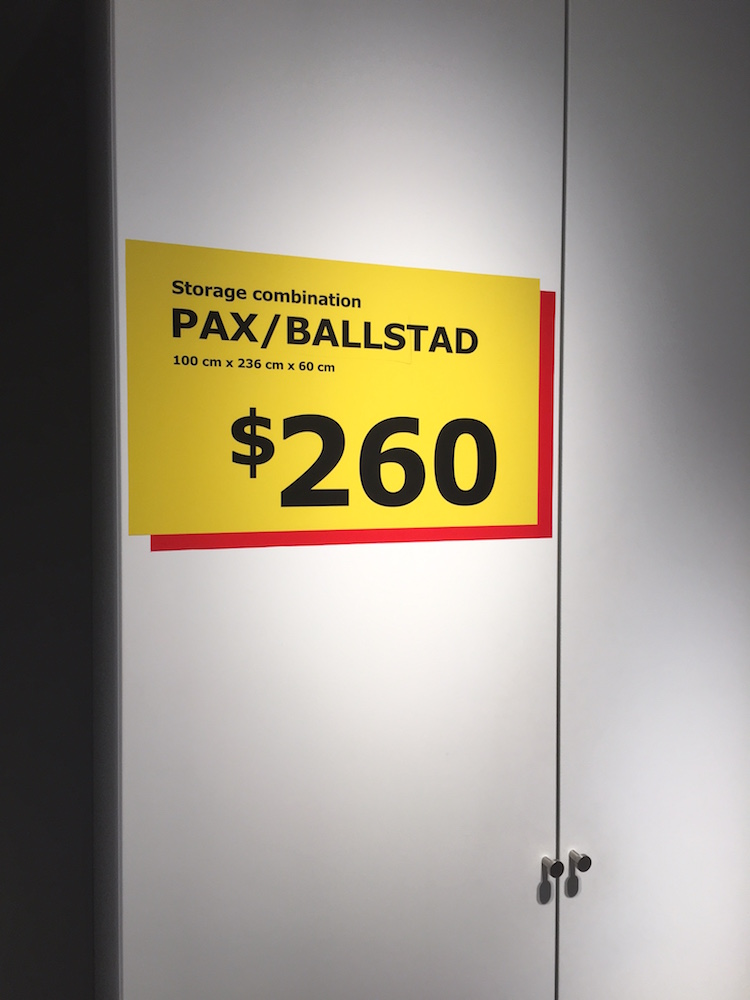 Also, Ikea tip: don’t yell the word hipster excitedly in the watering can section. You scare other customers.

I decided that seeing as I was on holiday, I didn’t have to  help put the TV bench together. So I ate lunch while watching Stargate Atlantis while Ben tried to put it together. It’s fairer this way. I don’t read instructions. He does. I don’t have an attention span. He mostly does. Of course some thingy bits were leftover, because that is the law of Ikea flat-packs. 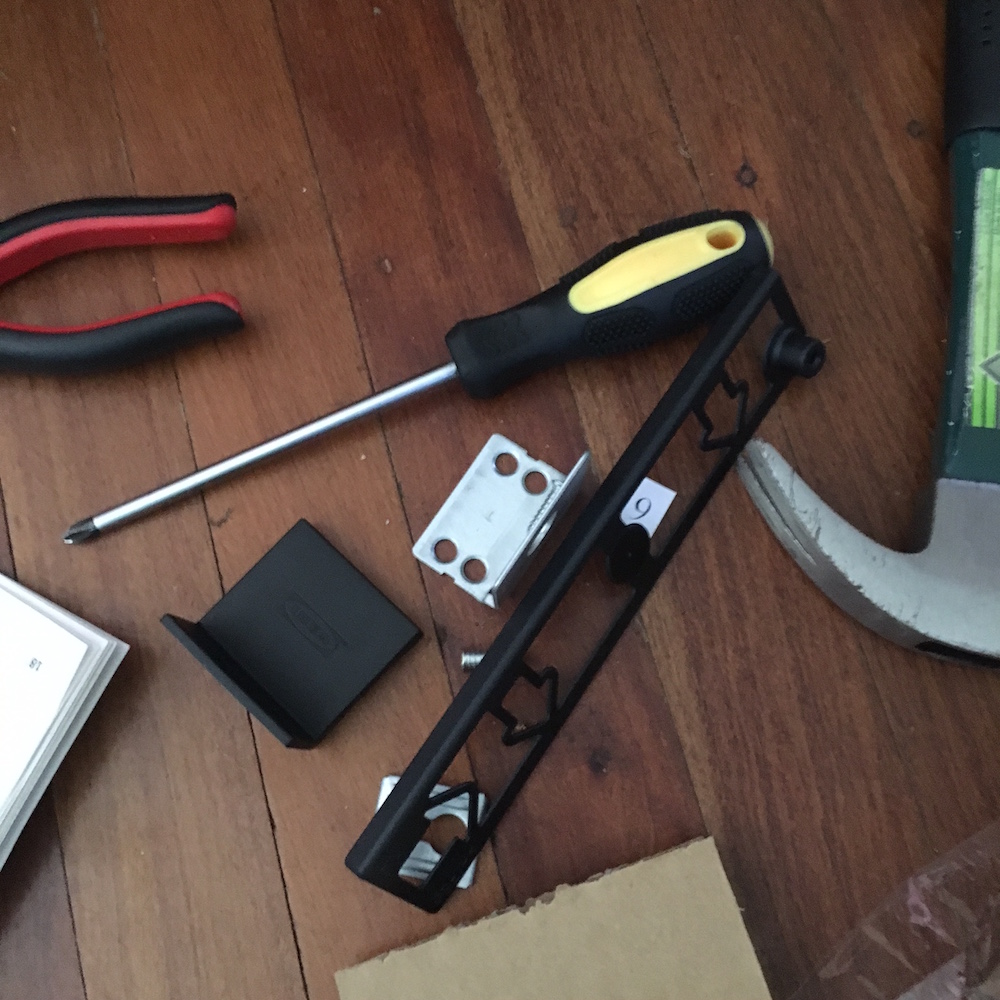 I think I pretty much kept watching Atlantis after that. We had an early dinner and then did our fortnightly grocery shopping. Tried to keep it a smallerish one due to all the flipping bills. Coles annoyed me so I’ve lodged a complaint but so far heard nothing. The deli staff in my local store are crap at the best of times, but on Tuesday night all three outright ignored me, so I bought my deli stuff at Woolies instead becuase … well, I have to get served to buy it at Coles!

I finally slept in by nearly an entire hour! Then I got up and wrote a job application. Not very staycation-ey but damn the job was too good not to apply for! But if I end up with it, I’d have to move and I don’t want to (but do but don’t). Anyway, I figured I’d apply and see what happens. You really can’t tell with jobs. I know experts will give you “rules” but I’ve used the same thing (it might be resume or selection criteria) on one job and been told it’s crap, whereas another job has told me it’s excellent. What is good about you depends on the whims of the hiring manager. And yes, that also applies to “merit based appointments”. Anyway, it only took about an hour out of my day, and we’ll wait and see what happens with that.

I then went out for a nice, low-tide wander at “the cove”. I tend not to call things by their proper name and make up my own name, because why not? 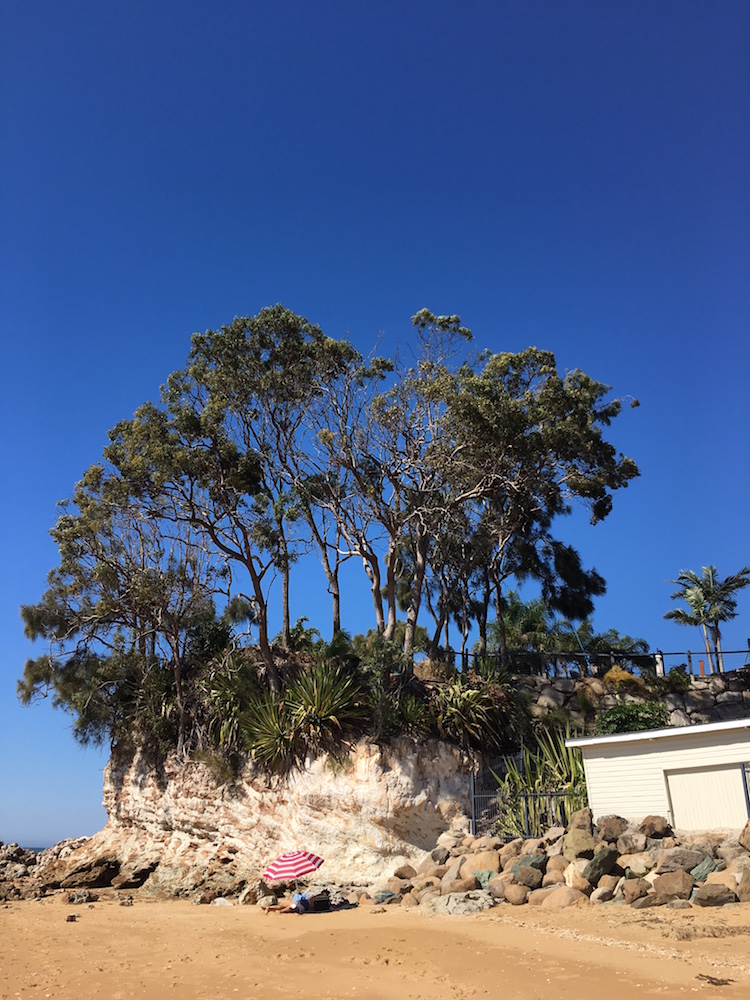 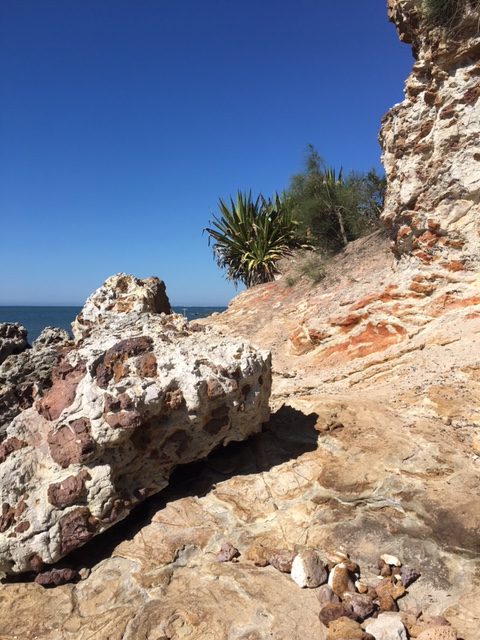 I tell you – two things I’ve done so far have been really good exercise (as in, I can feel it “working”). One was squatting and taking photos at sunrise on Sunday, and the other was this walk on the sand. Ah. Leg muscles are being challenged to grow in ways they haven’t been used for a year thanks to illnesses! It’s ok though, I am taking it slow. The last thing I want to do is overdo it in any way!

We decided we really needed hot chips and good internet, so we hightailed it to my in laws house to use their NBN. We had a massive download to do on our Xbox that was about 1/4 of our monthly usage – and would take literally days on our shitty Telstra ADSL connection. It only takes a few hours on NBN speeds. We got some hot chips from the takeaway place up the street and I fed one to their duck. 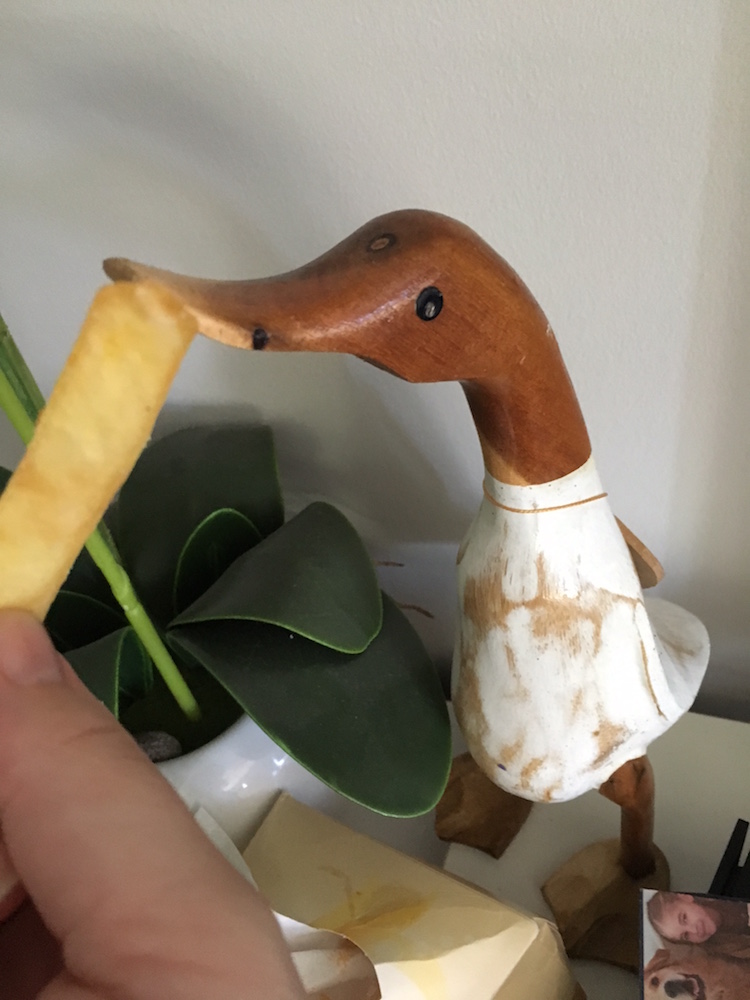 We decided not to sit around and watch it download, so we left the Xbox at their house and went home for a few hours. By the time we got back, it was still going. Masssssive update. I still don’t understand how you’re supposed to own some things without access to NBN.

After dinner, Mad as Hell and Utopia – well, that was the end of my staycation. Also, it’s so good I don’t have a sore throat anymore because I can actually watch comedic shows without swearing in pain!

18 Replies to “My Non Ekka Staycation”