Do you ever find some periods of your life a bit more tiring than others? That’s where I’m at right now. Nothing is really wrong, just a bit tired by things. Maybe it’s just the “getting close to the end of the year” type mood. I could use a break! At the moment I don’t plan to have anything more than the 10ish days between Christmas and New Years off work though. I’d like more time off but also I like my area when there are fewer tourists, which certainly isn’t that time of year. I might chuck an extra day or two in just to have a short week either side. Haven’t really decided yet.

We’ve had a bit of a yard saga recently. We had a lot of rain a few weeks ago, which naturally meant the grass grew. Then our mower wouldn’t turn on. Granted, we haven’t taken perfect care of it and it’s a bit old now, so it was hardly a shock. So we borrowed a mower from Ben’s mum, which hadn’t been used in a long time. It would start but not stay on. Frustrating. We weren’t sure if we wanted to buy a new mower or pay to get one or both of the mowers fixed. In the mean time, the grass just kinda did its thing and kept growing.

We figured maybe someone could come in and get it down to a regular height while we made up our minds. Ben’s mum pays someone $40 to do her lawn, which is a lot bigger than our tiny block. Figured, oh, it is long, so maybe $60 max? Haha. As it turns out, I was wildly wrong. The people who came and gave Ben a quote (and it’s so good I wasn’t home to laugh at this, because I probably would have laughed in their franchised faces) wanted $129 to mow the lawn. Or $240 to mow it AND remove the grass clippings. Yeah. No. Noooooo waaayyyy would I EVER pay that. It’s long and there’s one annoying patch of weeds but geez, it’s not a freaking forest.

Anyway, we decided that it was not worth servicing our old mower. Which kind of sucks. I prefer to repair rather than replace, as replacing seems wasteful. But also, cost comes into play. It would probably have cost at least $150 to get it fixed, and with no good timeline on how long it would last. So for $150 we decided to buy a new lawnmower from Bunnings, because a) it’s new and therefore WILL work and b) it has a 3 year warranty. The person on the registers told me that at least 4 other people had bought the same mower that day so I’m hoping that is a good thing. 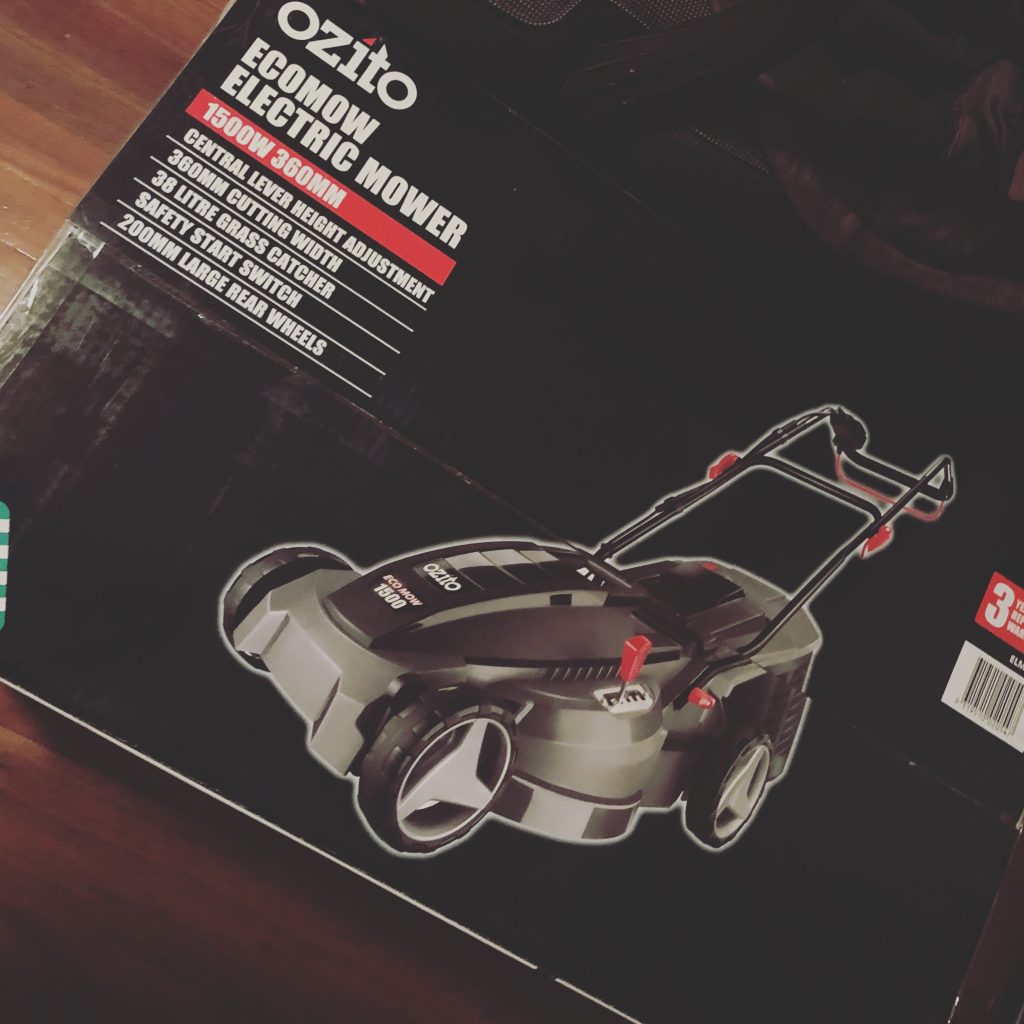 When the yard dries out in a few days, I guess we’ll know how good it is! Though, seriously. You know how BIG the Bunnings trolleys are? Because they have to fit BIG stuff on them? Yeah. Driving one with a stiff wheel up this aisle sucked. Boxes narrowing the aisle and the hanging whipper snippers catching on the flag pole of the trolley….bad bad bad. How I didn’t destroy anything I have no idea. And those hanging whipper snippers made me feel like one of those people in a movie who walk into a barn full of dangling blades of all shapes and sizes. (FYI this is the same Bunnings store where I once found a saw on the first aid kit box so.) 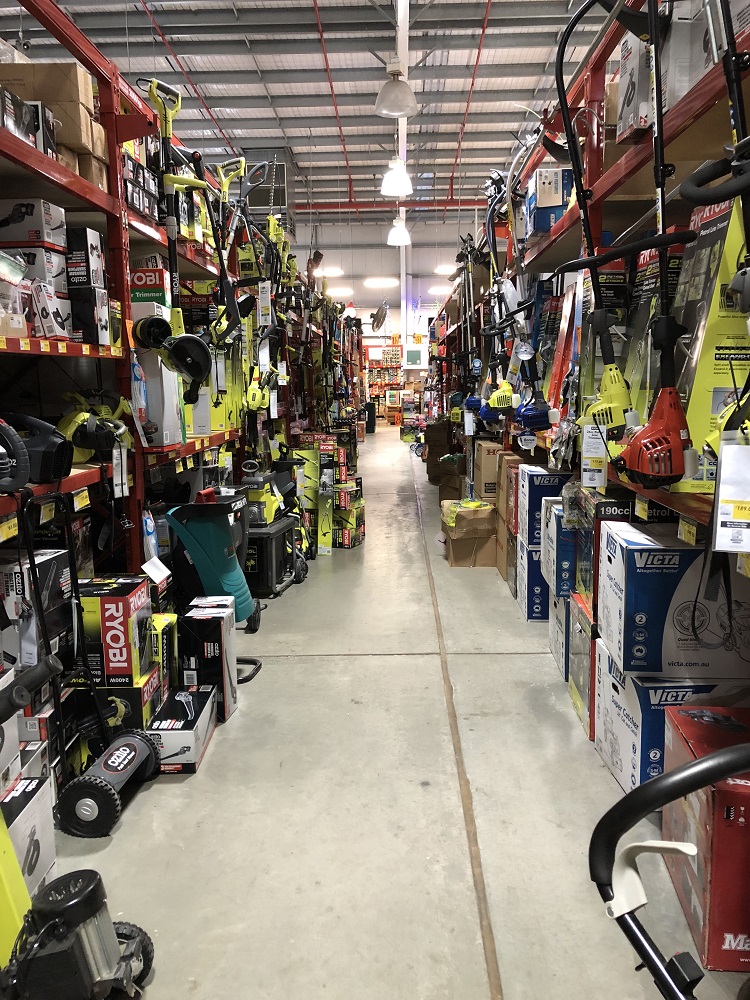 I took last Friday off work because it was my birthday. I had also just come out of a busy cycle at work so I had over a day of overtime banked anyway. So why not have my birthday off and make it a long weekend?! It was actually a bit of a hot day and we didn’t get up to much. We grabbed some food from a bakery for breakfast and got totally attacked and stalked by magpies, who only cooled it when rainbow lorikeets showed up and attacked them. They were the boldest magpies I’ve ever come across. 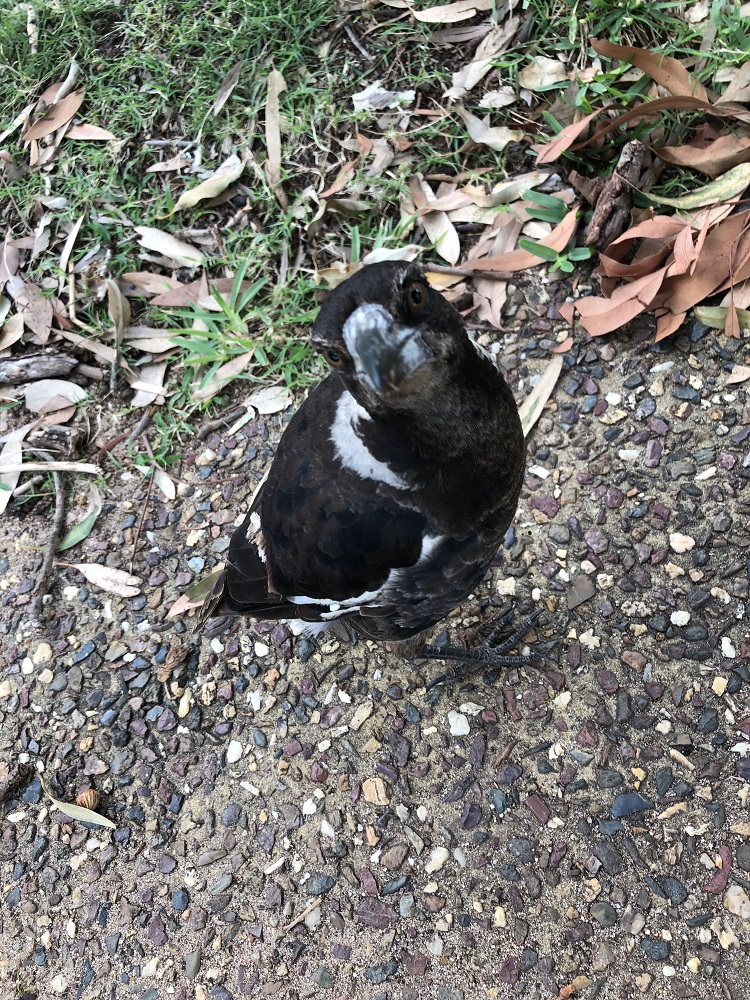 We went to our favourite fish & chip shop for lunch. Check out the size of the calamari ring. 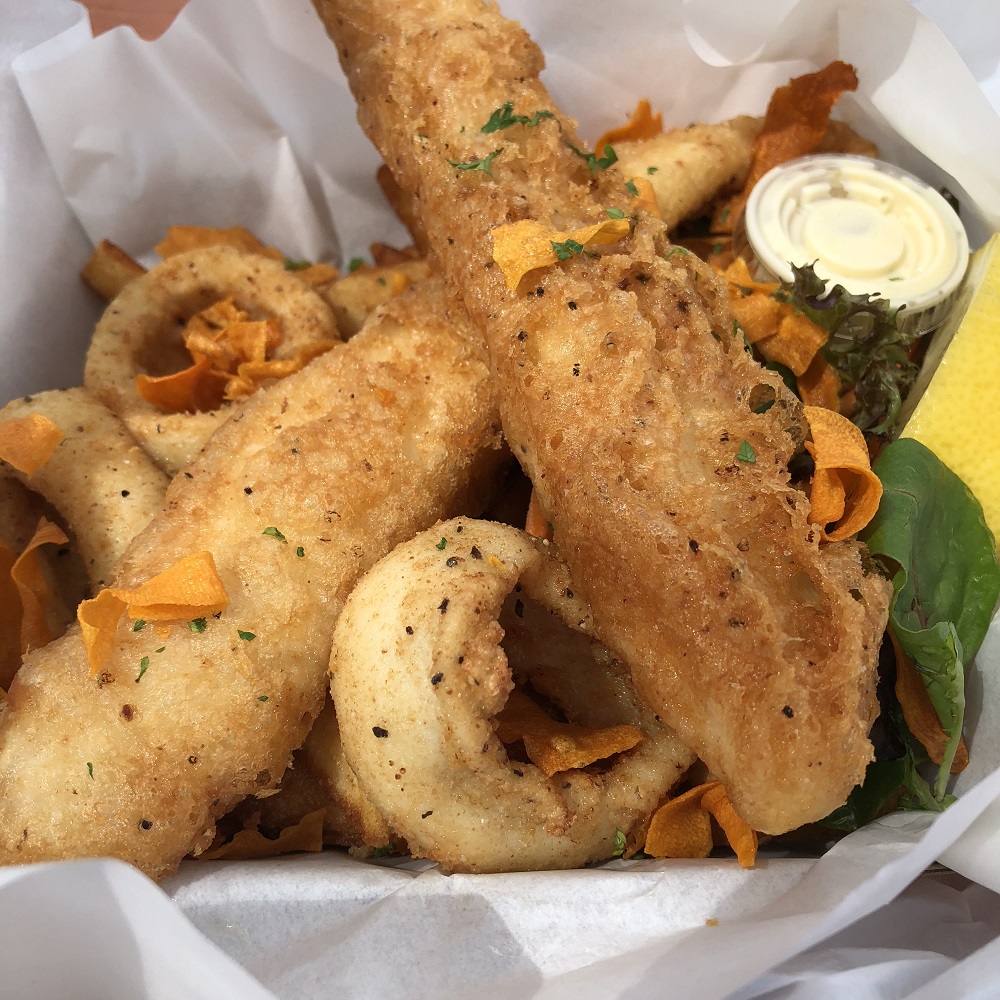 And it was terrible and awful and ugly to eat it by the beach. 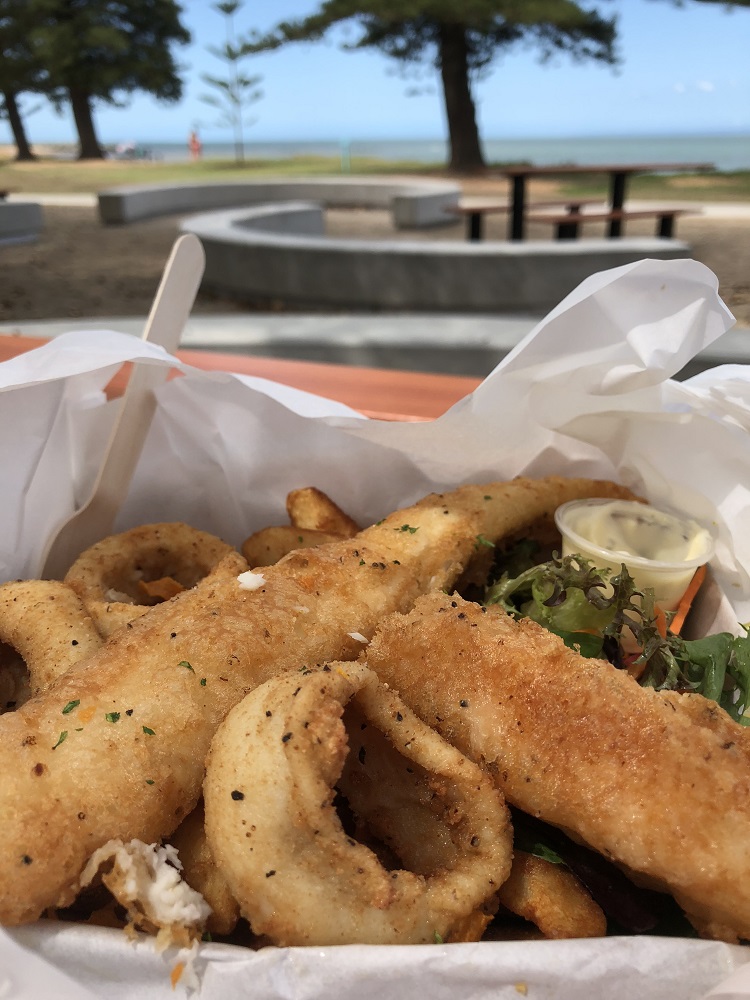 Triple awful to sit under this giant tree while eating it. 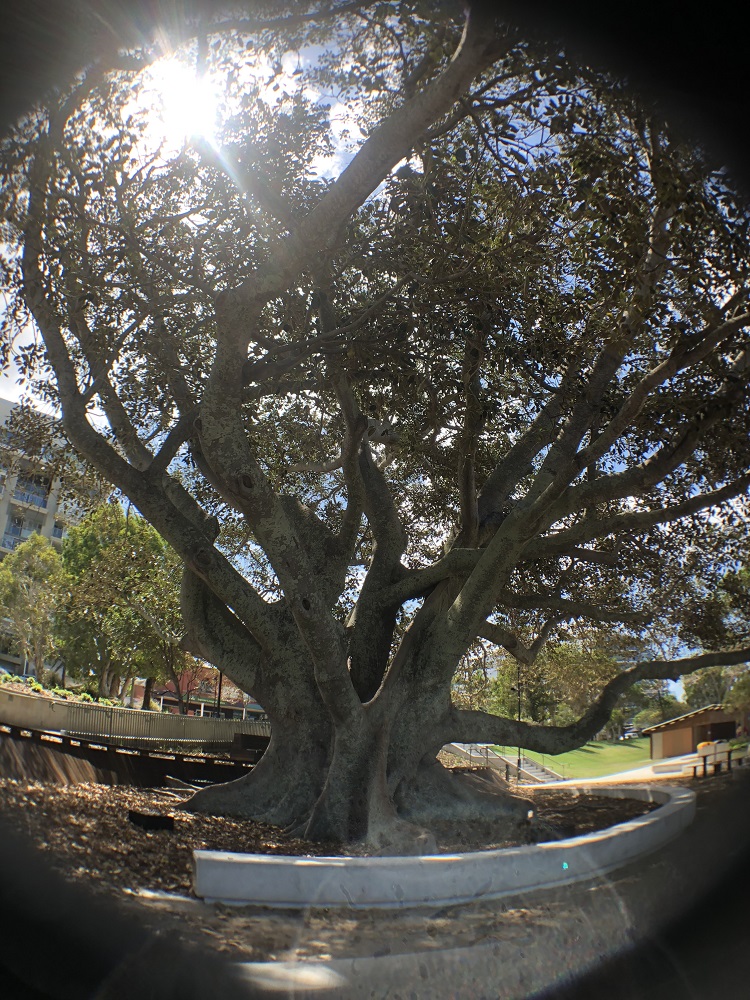 I was given this awesome card game (that I’m yet to play because of above mentioned end of year brain fuzz). 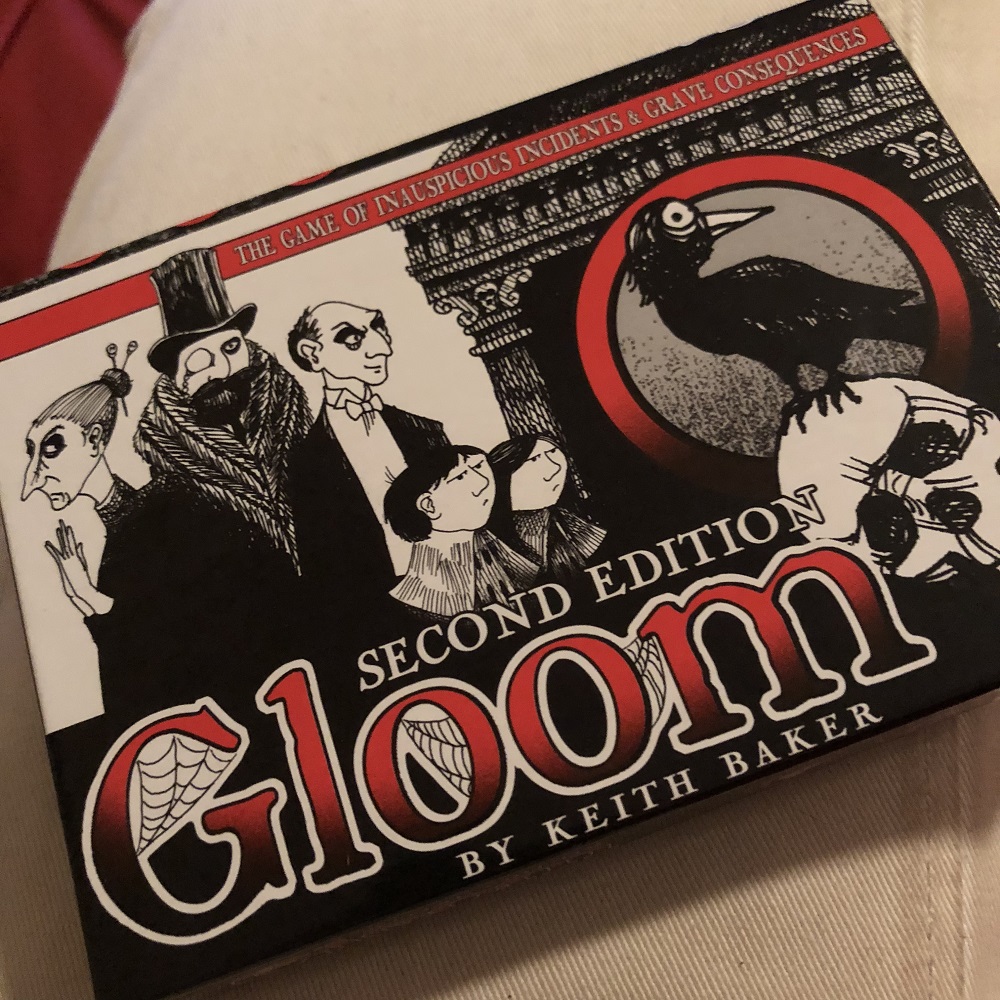 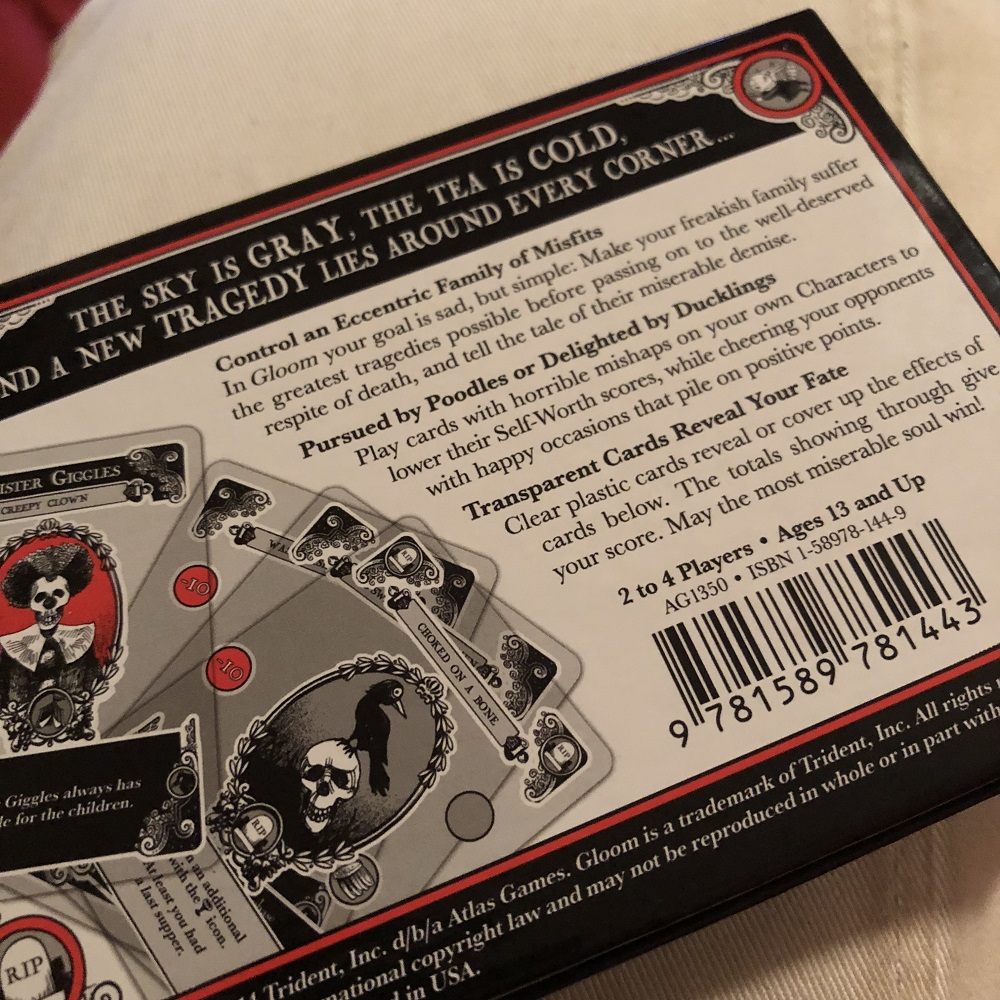 Apparently I’m hard to shop for. Which is kind of correct. I’m not much of a wanter for small things. (Not that I expect people to buy me things for my birthday.) Two people ended up giving me cash. Which means I finally got a new pair of noise cancelling headphones, and a bag that was similar in style to a “designer” one I missed out on getting on a buy/sell list earlier this year and couldn’t stop thinking about wanting. Thanks to the two cash gifts, I effectively got the headphones for $9 (the price on the packet in store was wrong, they were only $59) and the bag for $5. So I’m very happy with these two purchases! 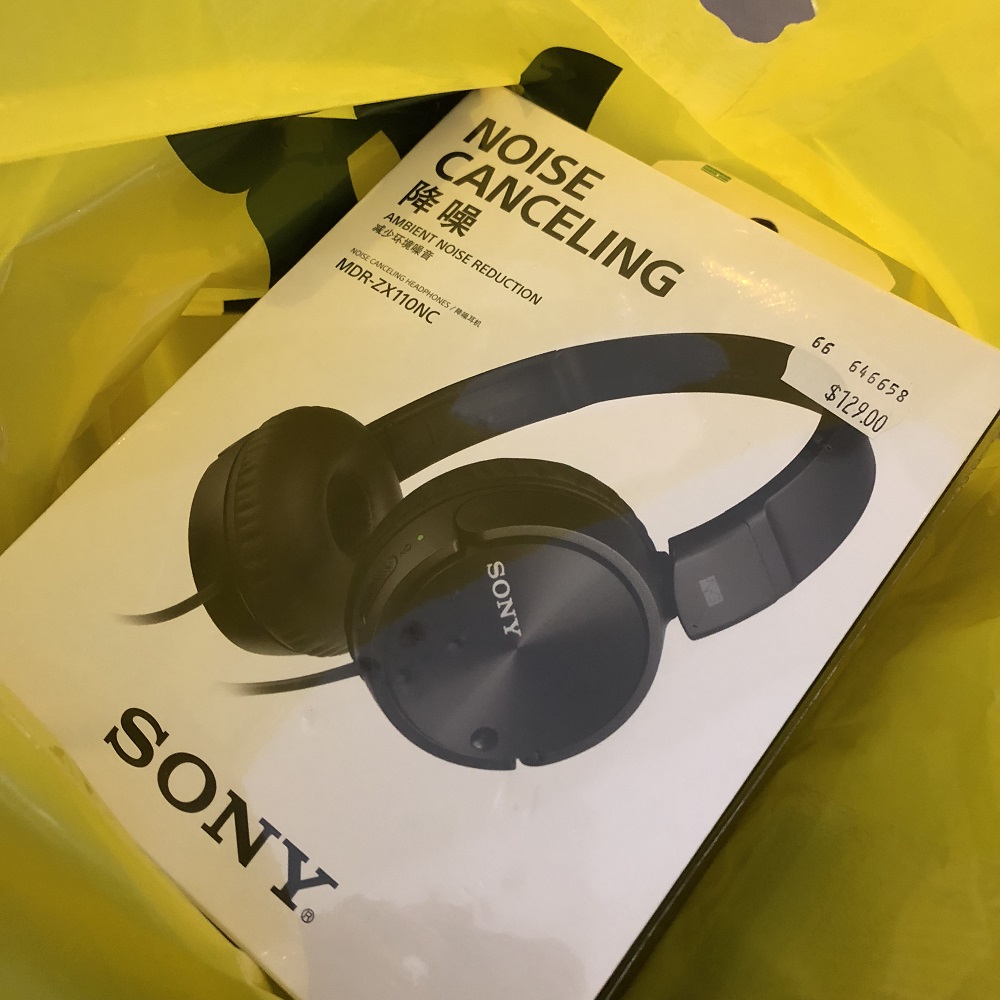 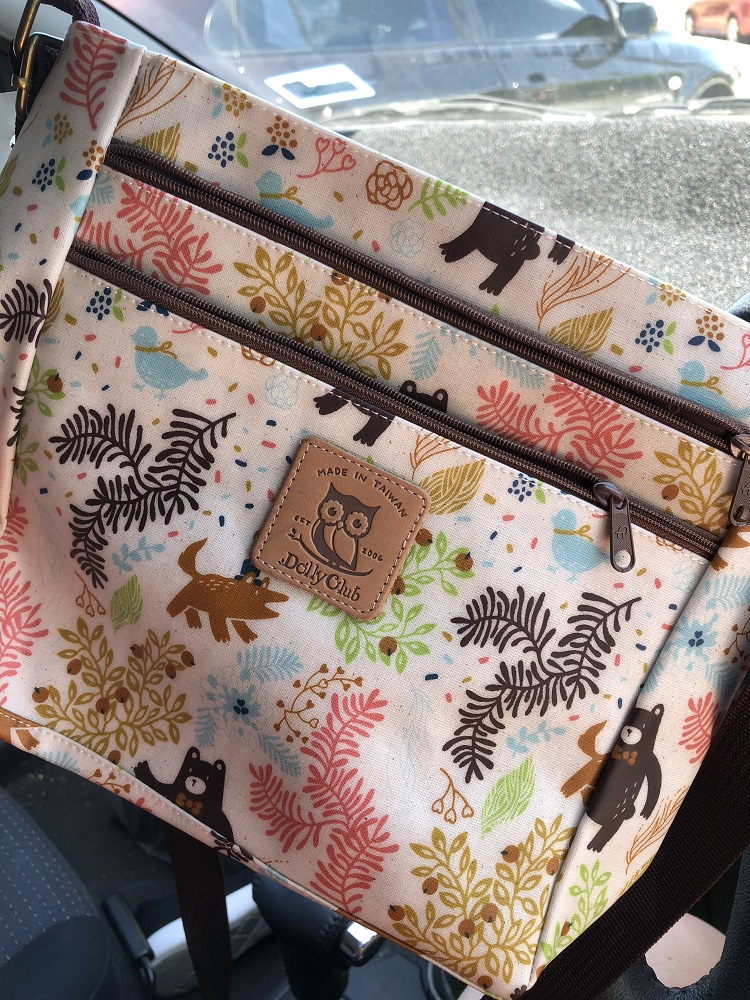 And the shopping on the long weekend continued as well! We went to one of my favourite op shops to look for a new bedside table. They’re a favourite op shop of mine because they actually sell things at “proper” op shop prices, not inflated wannabe prices. We came away with a bedside table and a new office chair for $21 total. 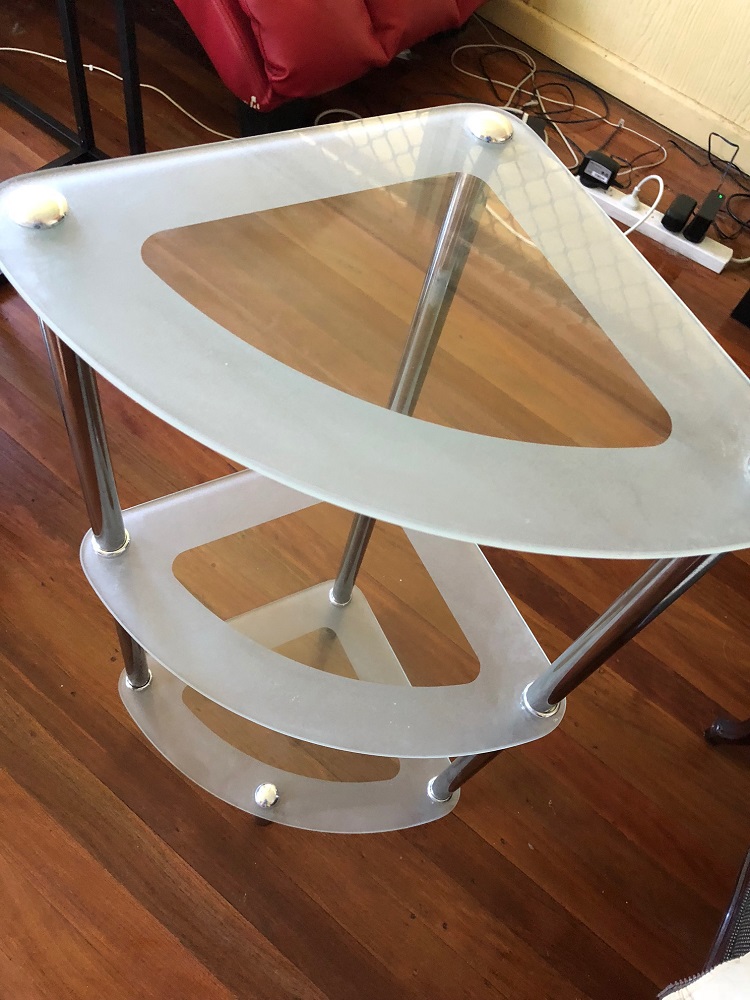 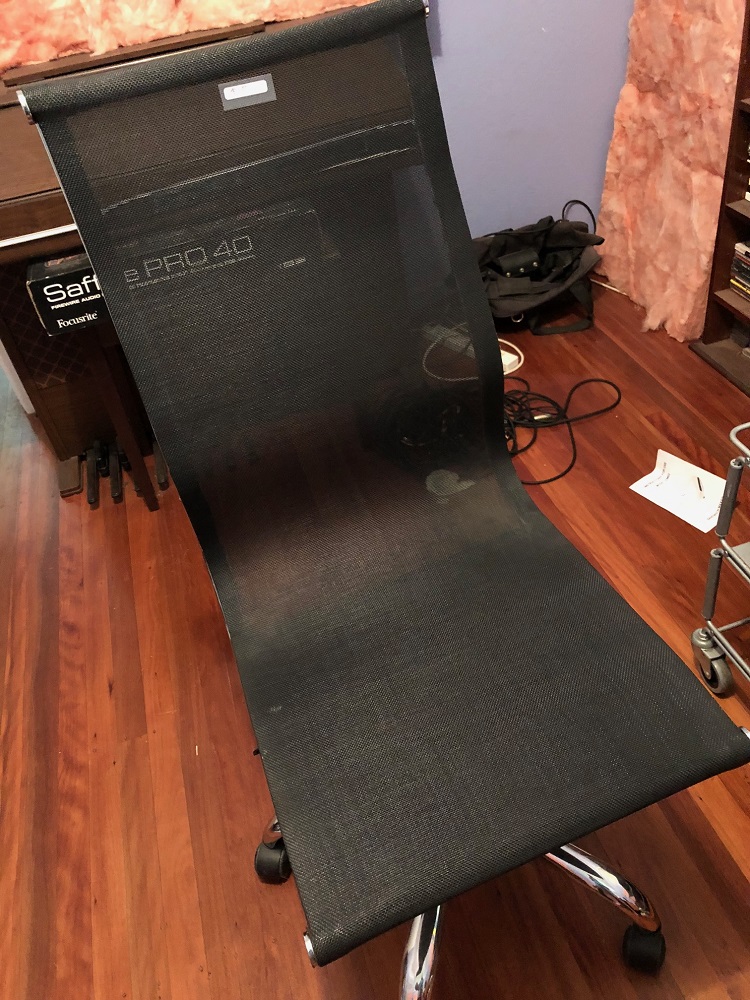 I do have before and after photos of us moving rooms around, but I’m not sure we’re 100% done with the after yet, so I’ll blog about that some other time. Then again it was months ago we “redesigned” our living room and I still haven’t blogged about that. So, my point is, I’ll do it some day.

And that has been what I’ve been up to recently.

Tell me something you’ve been up to! Gotten any great bargains? Do you like new or second hand or a mix?