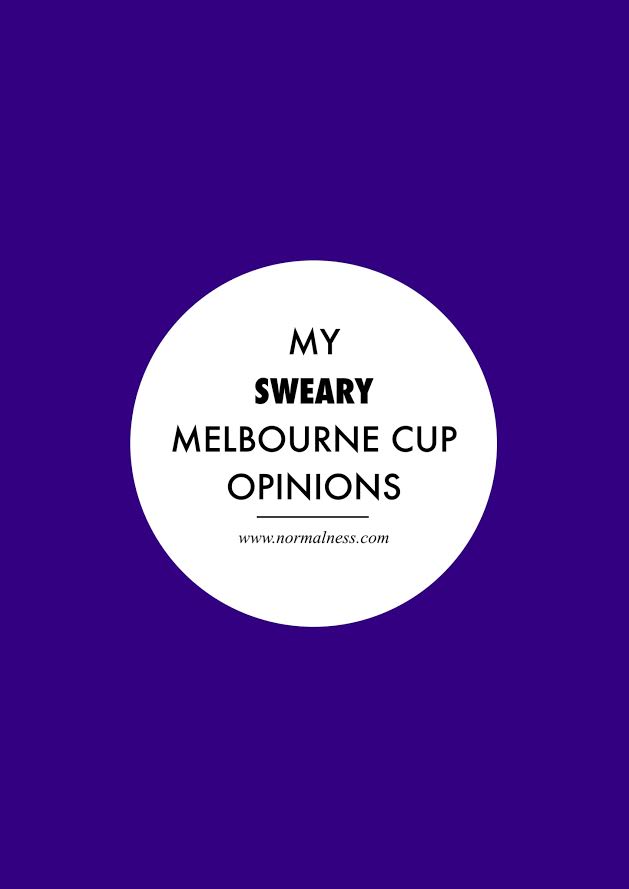 I must confess… I really don’t give a fuck about Melbourne cup.

I love horses & horse sports, but I don’t know of any other sport that puts so much strain on a horse that is so young.

And no, I still don’t give a fuck if you think I’m jumping on a bandwagon. You know why people talk about it most at this time of year?

Because it’s the most famous race in Australia!! Can I get a DUH?!

I especially don’t give a fuck if you think I just don’t get it because you grew up around race horses & you know how much effort goes into training a horse.

How bloody selfish is that on your part?

I don’t care if you waste time, energy & money training a horse. I care that two, three & four year old horses aren’t old or physically mature enough to be put under that much strain.

Breaking in a horse often doesn’t start until around age four (it can vary below that due to a number of factors). So, by the time many racehorses are done with their career, a regular horse is barely getting used to a saddle & a person sitting on them while they walk around in circles in a relatively safe environment.

Horses & racehorses may very well be under saddle at the same young ages, but they’re usually sure as hell not being galloped under full physical pressure for money.

In Three Day Eventing (an equestrian sport I do support, though it isn’t without its own risks) the minimum age of a horse competing at the elite level is six. It is a risky sport, but one where they put a lot of effort into protecting both horse and rider: riders vests can have air bags built in, courses are designed to be challenging but safer, horses wear more protective gear, expected course completion times are adjusted for things like heat (even in the Olympics). It’s not perfect, and it doesn’t eliminate all risks, but in my book, at least they’re a sport that looks like it tries to make it safer and ensure the continuity of the sport.

You know what makes Melbourne Cup specifically suck a bit more for me? My birthday is in early November. Which means that every few years (like this year), the media and people around me spend my birthday talking about things I think are cruel. It’s a bit sucky.