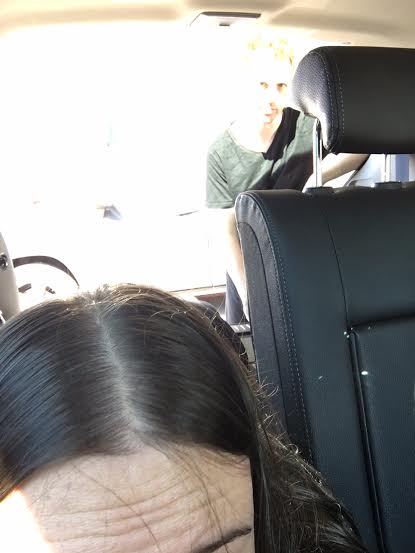 We decided to look at getting a small SUV in the past week – a higher car makes it easier for Ben to get in an out of. Or that’s the theory. Today after doing some errands, we went butt sliding. Which is what I’m calling testing the theory of getting in and out of cars easier.

Of course, it disturbs car sales people. We were butt sliding at a Nissan dealership and a woman came up to us and asked if she could help us. I told her she couldn’t. She said that was sad. I said we’re testing if car sizes make it easier for Ben’s mobility issues, therefore only he can help.

Life hack: sales people do not appreciate logic and/or reality.

We were also butt sliding at Holden. You see, despite going SUV shopping, I actually think most SUVs are ugly. But the only one I’ve ever slightly liked the look of is the Captiva. I was thinking I should get the mini-er version, the Trax, just because I have no specific need for anything that’s not a small SUV. But I’ve got to say, I do like the Captiva. It’s nice to feel more space around you in the car.

Of course, most people like doing things like test driving cars. We just slide our butts to see if they’re easy to get in and out of. And then I flatten the seats and see if it’s big enough to nap in the back at the beach.

Also, that’s why I now want one with a sun roof. Ironically, only for night, because I don’t like being out in the sun.

I haven’t even worked out which way to finance it yet…so for now we’re really just testing if the theory of butt sliding works. So far it seems to, but it depends on the height of the car. The Holdens were easier to get in and out of than the Nissans, because they’re taller. Because we’re massive Community fans, we are morally obligated to go try a Honda CR-V at some point too.

What car do you have? Any personal experience with a current-ish model small SUV that you could tell me about?