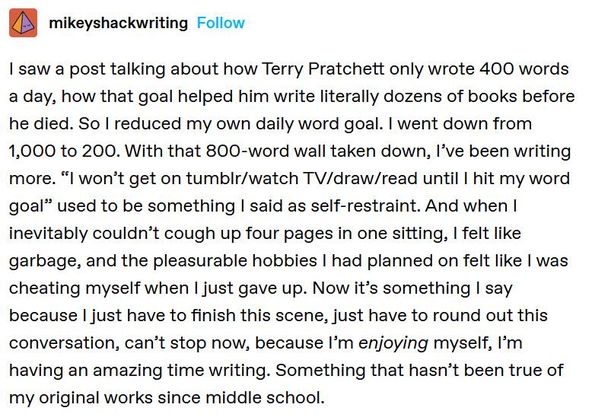 A friend shared the following as an image on Facebook. I tried to find the original source, but it appears the tumbler account doesn’t exist anymore, but this post was reblogged and screenshotted.

I saw a post talking about how Terry Pratchett only wrote 400 words a day, how that goal helped him write literally dozens of books before he died. So I reduced my own daily word goal. I went down from 1,000 to 200. With that 800-word wall taken down, I’ve been writing more. “I won’t get on tumblr/watch TV/draw/read until I hit my word goal” used to be something I said as self-restraint. And when I inevitably couldn’t cough up four pages in one sitting, I felt like garbage, and the pleasurable hobbies I had planned on felt like I was cheating myself when I just gave up. Now it’s something I say because I just have to finish this scene, just have to round out this conversation, can’t stop now, because I’m enjoying myself, I’m having an amazing time writing. Something that hasn’t been true of my original works since middle school.

And sometimes I think, “Well, two hundred is technically less than four hundred.” And  have to stop myself, because – I am writing half as much as Terry Pratchett. Terry fucking Pratchett, who not only published regularly up until his death, but published books that were consistently good.

And this has also been an immense help as a writer with ADHD, because I don’t feel bad when I take a break from writing – two hundred words works up quick, after all. If I take a break at 150, I have a whole day to write 50 more words, and I’ve rarely written less than 200 words and not felt the need to keep writing because I need to tie up a loose end anyways.

Yes, sometimes, I do not produce a single thing worth keeping in those two hundred words. But it’s much easier to edit two hundred words of bad writing than it is to edit no writing at all.

Basically, YES. I quit my last writing platform because of sync issues but I was also glad to get away from it because it was obsessed with telling you about the streaks of your writing.

But I might write 2000 words then none for a week or two. It all adds up to the same in the end. Big ebbs and flow is how I work on nearly anything, writing related or not. So I really hate the fact that “a little each day” is promoted as morally superior.

There are so many made up rules that get pushed on us that have no value. Look at that post above and see how freeing changing the rules was for them.

I know, it could seem hypocritical of me to write about how I don’t like daily word goals when I’m in prep time for NaNoWriMo. But if you want to see how I wobble ahead and behind, have a look at the two below images (from 2019 and 2020 NaNoWriMo, both years where I hit the 50k words goal):

The community on the NaNo forums keeps me going to hit such a large goal in such a short time. I do it because I like it, not because it’s sustainable each and every day forever. At least not with a full time job, caring responsibilities, and chronic health shit.

Do you feel rules and goals can guide you away from how you work best? Have you ever had situations like this?

By the way, I write a lot about creativity (and creativity with a chronic illness) on my Patreon page. You can join for as little as $AUD 1.50/month.

The First Chapter of Your Book

2 Replies to “About Writing Goals”