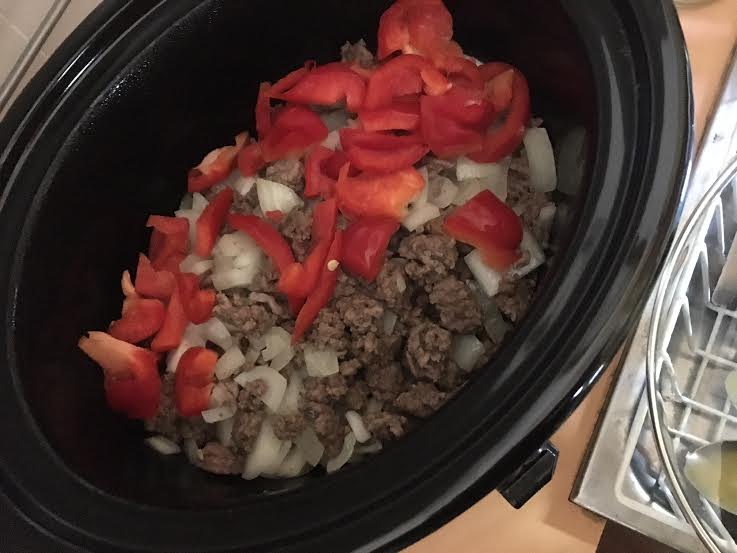 Ever since I scored a $3 slow cooker at a garage sale last year, I’ve been a bit slack at using it. I figured making chilli was probably a pretty safe first timer thing to try and make (I’m not counting a gooey botched batch of rice). As I usually do, I skim the internet for ideas or tips and then make it up as I go. Every slow cooker recipe said to brown the beef and onions first, so I made sure I did that.

I used about 500 grams of minced beef for this recipe. I think. I wasn’t sure how that would go as my slow cooker isn’t a particularly large one. While there are only two of us in this household, I do actually prefer to cook larger meals and freeze extras for lazy days. I am queen of lazy food. 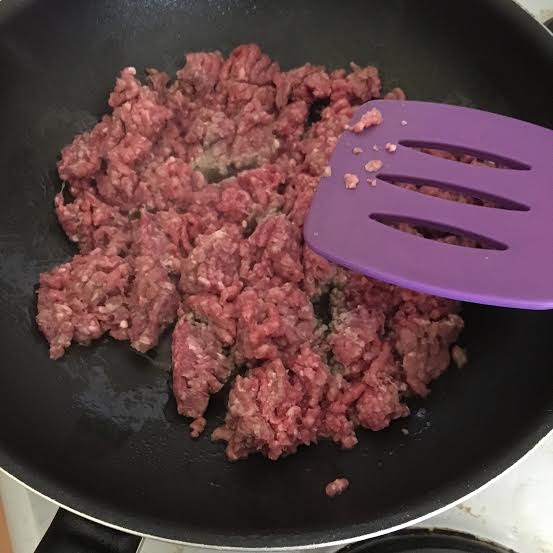 Don’t we have such a glamorous, orange kitchen bench? It’s glorious. The joy of old rental houses. I managed to make Ben cut the onions for me as I can react really badly to onions. 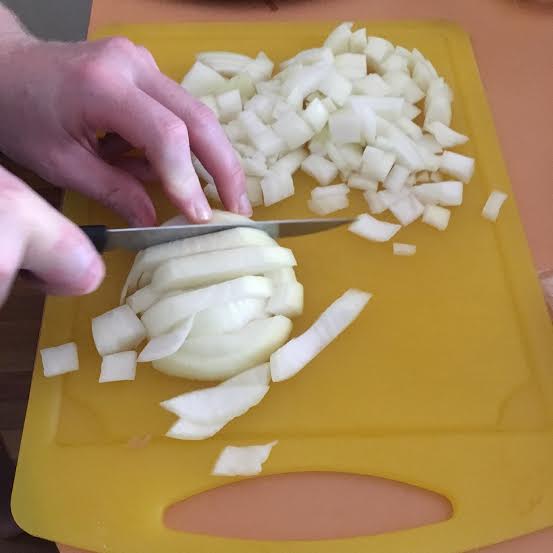 I had most of a red capsicum in the fridge that needed to be used, so I added that into the slow cooker when the beef and onions had been cooked.

I like carrots. A lot. So I decided on putting four in the chilli. It would be pretty easy to omit the minced beef from all of this and make a vegetarian version. 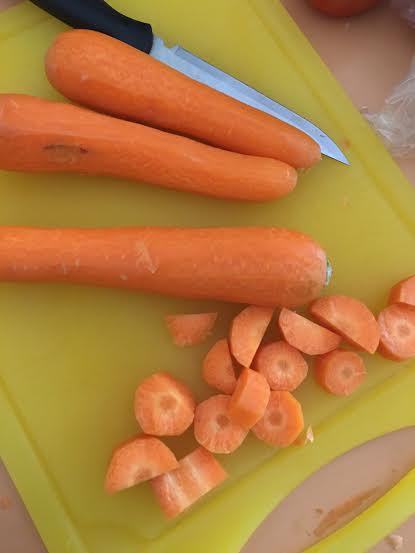 I put in two (rinsed) cans of red kidney beans and one can of diced tomatoes. 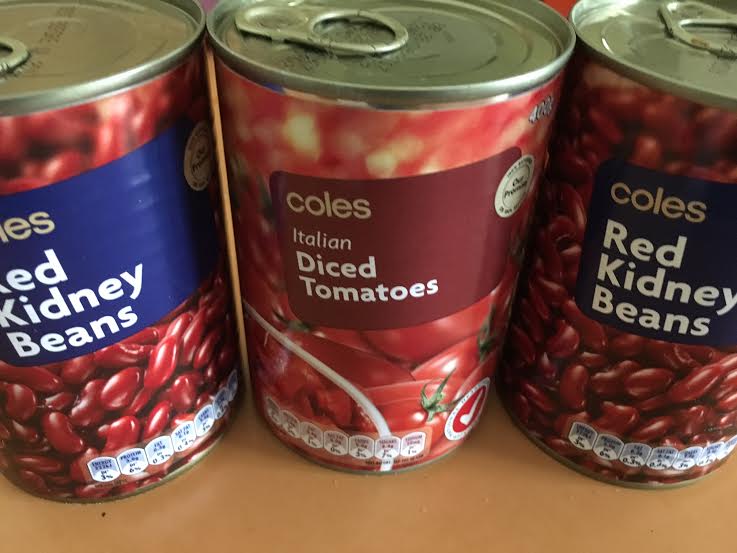 I also had some tomatoes in the crisper that were about to go off, so I chopped them up and added them, along with some frozen peas and corn. 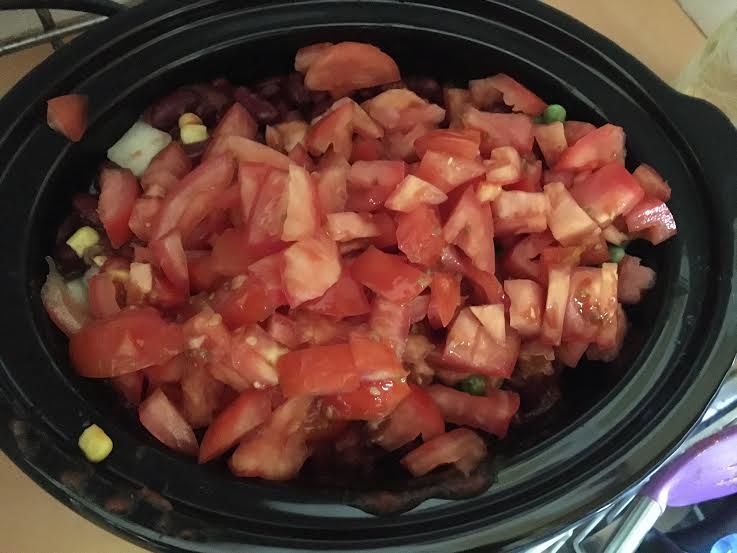 For flavour, I put in parsely and chilli powder. This is where I was really making it up. I mixed these with some water and added them. As you’ll see below, this thinking was really wrong, but what I was thinking at the time was that if it’s on for ages, it will boil dry, so I should add extra liquids. 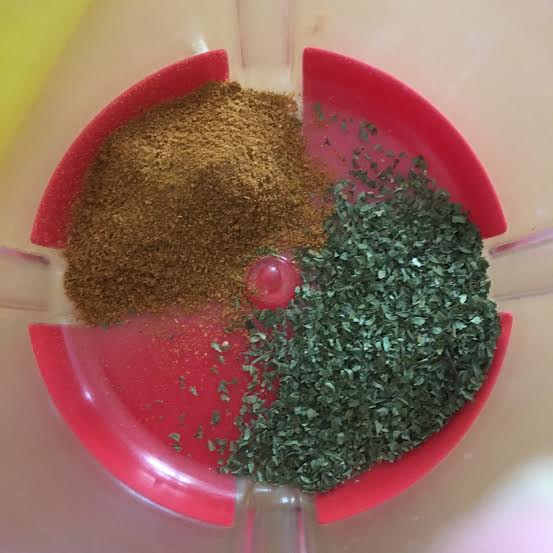 I also added in one chopped jalapeno, seeds and all. Just because I had them.

After about 8 hours it was ready. I cooked it mostly on high, but again, made a newbie boo-boo when I realised I had actually set the slow cooker to auto and not high. Whoops. Pay attention to stuff…geez…

I kept checking and stirring it, which apparently slows it down. I did see some reference (either in the manual or on Pinterest, who knows) about how every time you open the lid, it adds 10-15 mins to the cooking time. Woah. It really is set and forget. Which is just plain weird to me. It didn’t seem to be very spicy, so I made a batch of my spicy sauce and stirred that through. I think it made about 6 bags. These are regular ziplock sandwich sized bags. 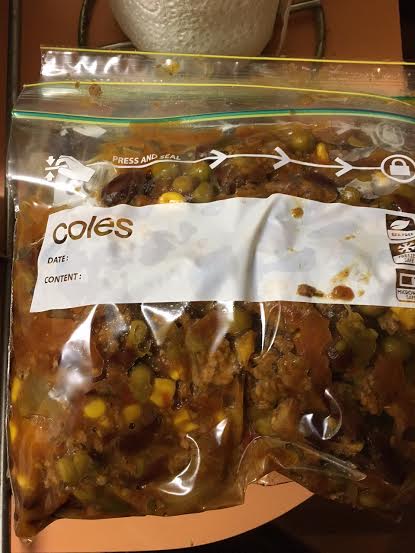 What I would do differently next time:

Well, basically I got a great tip from food blogger Lisa: double the spices and halve the liquid. Great advice and it completely made sense given what I put in and how it came out. I reheated a bag of it for lunch one day at work and it was very goopey.

What did you first try in your slow cooker? Do you have any tips for a good slow cooker beef chilli?