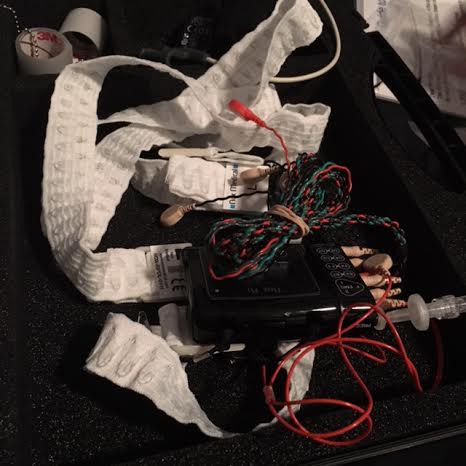 After a period of extreme fatigue, and blood tests that cleared me of low iron, thyroid problems and a few things like that, my GP referred me for a home sleep study.

My old GP was supposed to do one a few years ago but he forgot in the wake of the brain tumor investigations & I wasn’t enthused towards it so I didn’t bring it back up.

The sleep study clinic had crappy servicing hours. I asked for a latest/earliest appointment so it didn’t impact on work. The earliest was something ridiculous like 11am so I managed to get the latest…which at 3.45pm (they close at 5pm) really isn’t that late!

You also have to return the device first thing in the morning …but first thing is not that early as they only open at 9am and have no drop off facility. Crap hours.

I made the mistake yesterday morning of taking a quiet moment at work to google what a home sleep study test looks like.

All they told me on the phone while booking was something on your finger & a device about the size of an iPhone.

FYI: they did not design this to be comfortable with breasts. You know how breasts bounce and move and stuff? Yeah. Have fun waking up with the device hitting you in the chest/neck/face because you moved slightly and it bounced off your breasts.

I was a bit late getting to the clinic because: public transport in Brisbane. But I had called them to let them know I was running 5-10 late.

I filled in the paperwork, which was a three page questionnaire about sleep habits. If the questions were anything to go by, I have great sleep habits.

I gave them my Medicare card, credit card & drivers licence.

I went into the room with a tech who took my weight, height (from my drivers license) and my neck measurement. She fitted me for the chest and waist straps.

I asked about tape as I often get small reactions to tape after blood tests. I got what felt like a dismissive “it’s hypoallergenic”.

You have to wear the device for 10 hours and sign a form saying you agree to get billed if you take it off. She asked me when I wake up and I said 6am, so she wrote on the paper for me to have it on for 8pm. They suggest you start putting it on at 7.30pm.

I asked about the nasal tubes, knowing I have sensitive sinuses and nose and everything. I was worried I wouldn’t be able to sleep with them. I was hoping for positioning tips or something that fell into the realm of useful tips.

I got “yeah, just try not to remove them”.

Thanks for the great advice.

I was thoroughly miserable yesterday after I picked it up.

I was crying in the shower, crying at my husband and I just DID NOT want to do this. I’ll write a bit more in a day or two about this week but it has been a very stressful (in both really good and really bad ways) week and this was the straw that broke the camel’s back. Plus I have a bit of doctor anxiety after years of uncaring ones that my husband has seen. Thankfully I really like my GP. I hope she never leaves the clinic.

I got my husband to read the instructions and stick the electrodes and things on me. If I had been on my own, no way I would have done it.

It took me much longer than usual to fall asleep. I watched some Parks & Rec, then an episode of Megastructures, then was still awake. I eventually drifted off to sleep. Somehow.

After a while, I was awake. Tried not to look at clock or lights and to just try to focus on going back to sleep, but that didn’t work. I was clearly also keeping my husband awake so I asked him if the night was nearly over. I figured if it was 5am I could just wake up for the day. Nope. I think it was 1.20am. I should have known it wasn’t 5am as the sun wasn’t up!

Felt horribly annoyed that I was awake at all. I took off my finger/wrist device, went to the bathroom, climbed back into bed (after walking into the bed, because apparently I don’t know where shit is in my own room), and started getting a bit sleepy. Right as I was thinking I could fall asleep – I realised I hadn’t put the finger/wrist device back on. Cue internal debate about if I have a shit. I figured if I take one item off it seems to invalidate the whole thing so it was all or nothing. I (begrudgingly) put it back on.

Of course, that totally ruined the nearly asleep place I was in. Back to zero.

I tossed and turned a little. I moved my arm to hug my pillow and whacked the wrist device into the wall.

That was the last straw. I grabbed my stuff & stormed to the living room. I put something I knew I could sleep to in the DVD player (That 70s Show) and watched a few episodes.

Want more posts? Sign up for the newsletter here so you don’t miss out!

I estimate I fell asleep on the couch about 2.30am but I’m not sure.

I must have been wiped out because I don’t remember moving until my alarm went off just before 6am.

It took me a moment to realise that was my permission to take the stuff off. Which – easier said than done. They give you instructions on how to put it all on but none on taking it off. I couldn’t work out how to detach the straps around my chest and waist so I just yanked until I was free. Care factor about possibly damaging things was low.

Peeling the electrodes off wasn’t easy due to the strong glue. I could actually feel the pressure of them still on my face over two hours later. But not everyone has sinuses as sensitive as mine. I used a facial wipe to clean the glue off then had a shower.

As I mentioned above, I’ve been a bit unimpressed with the company from the start so I have a small win in that my husband is returning the device for me this morning as I have an early meeting at work.

I don’t know what they gain out of a very non standard sleep but oh well. I’ve always been a snorer but only on my back (which I’ve already trained myself to rarely sleep on) so I’m hoping that if it does come back with anything that sleep positioning device is all I need. It’s also part of the reason I’ve gone to see a dietician, lowering my weight (113kg) will help lower risk factors.

Have you ever had a sleep study? Did you manage to sleep during it?

Hey Insurance, This Is Why No One Likes You
Comments (11)

11 Replies to “What A Home Sleep Study Is Like”