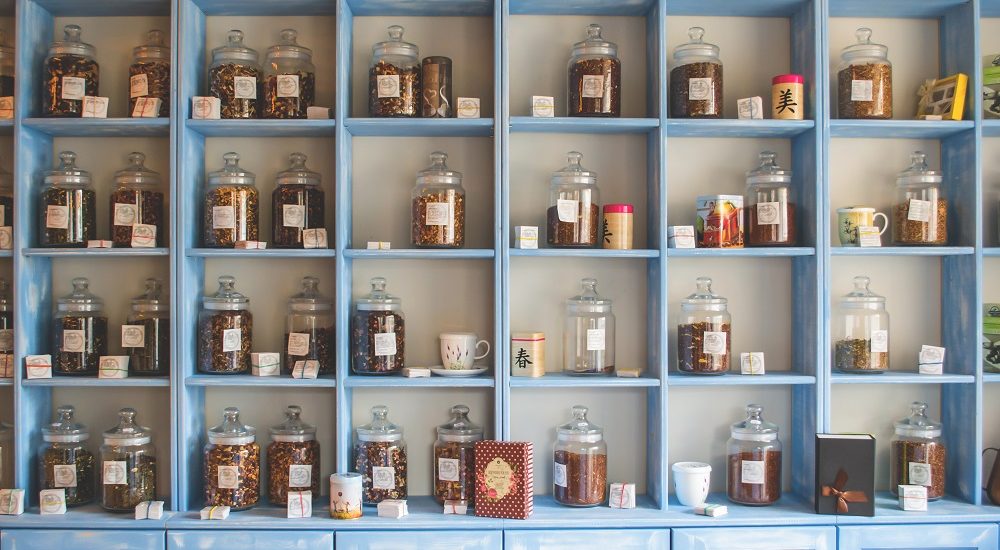 I used to post my grocery shopping on here pretty often. It all started with my very tight budget post when I was working part time and struggling financially. Then I did it regularly, sometimes along with photos of the meals I had made. But I stopped, partially out of laziness and partially because what we buy each fortnight doesn’t really change. I’m also not the prescriptive type; I liked to share what I bought and what I made as it might give you ideas. Sure, I could tell you how I made each meal but I don’t cook using recipes and don’t shop using meal plans. I probably technically do but it’s all in my head and I’m not writing it out when there’s no benefit as we all work these things differently. 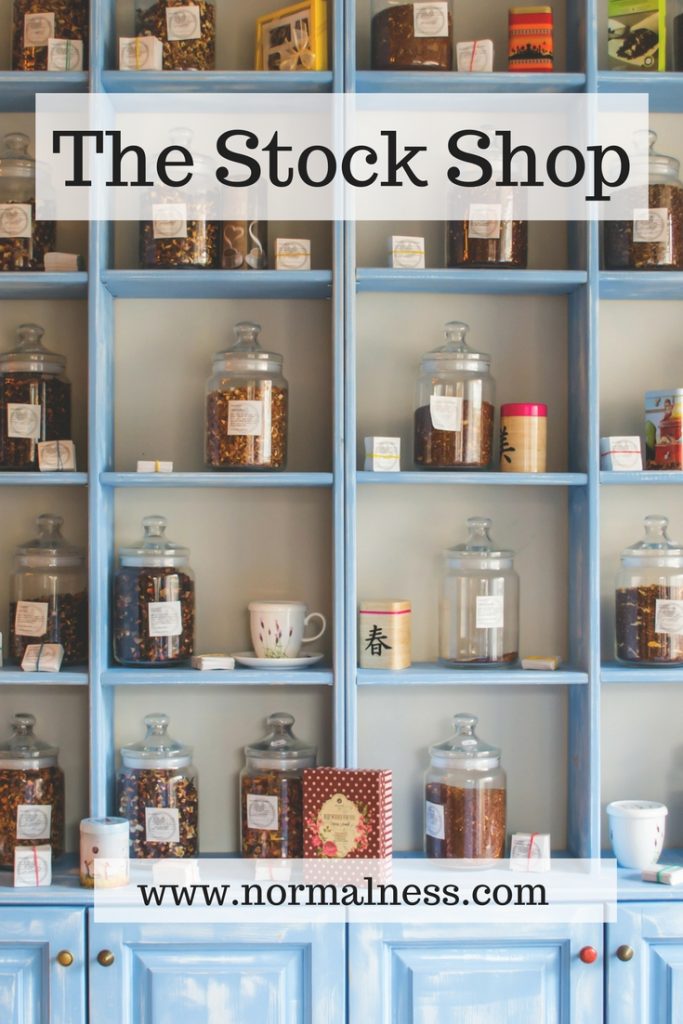 You may have seen this video on Instagram a few nights ago:

This mess is the 3 weeks worth of grocery shopping that we did so that hopefully we don’t need anything for the next few weeks while I’m recovering from surgery. As my husband doesn’t drive, it was necessary that we stocked up big. You’ll note we don’t really have fruit or veg – we don’t buy them from the supermarkets as we have a fruit and veg shop a few doors from our house. 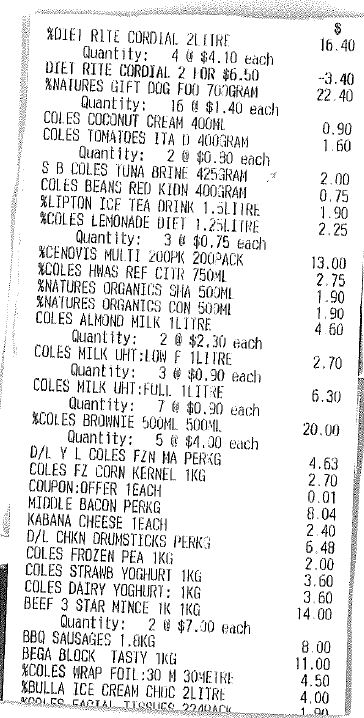 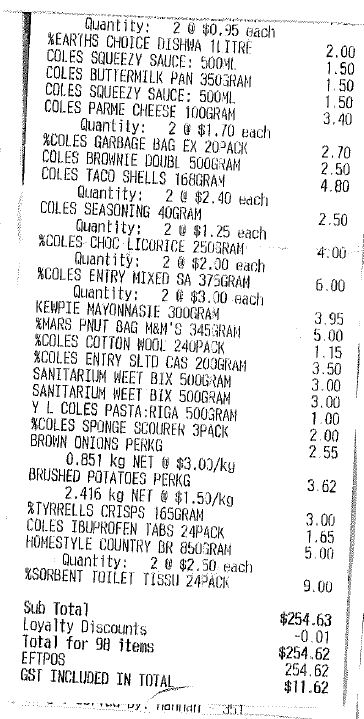 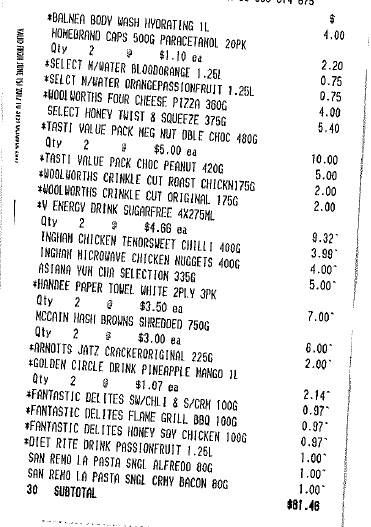 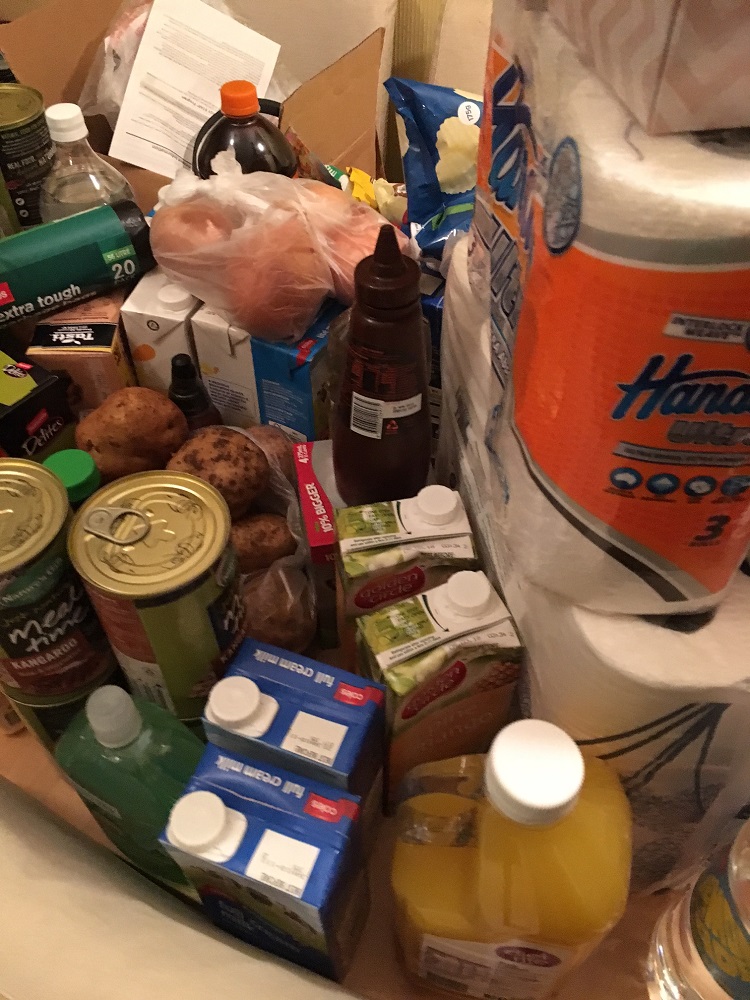 Our dog is a type 1 diabetic so we never change so much as the flavour of the food she eats. So we bought a lot of cans to have on hand! And also, I freaking love those cheese and chive chips. And may have already eaten all of them in the past two days (I might as well enjoy some relatively pain free crunch right now). 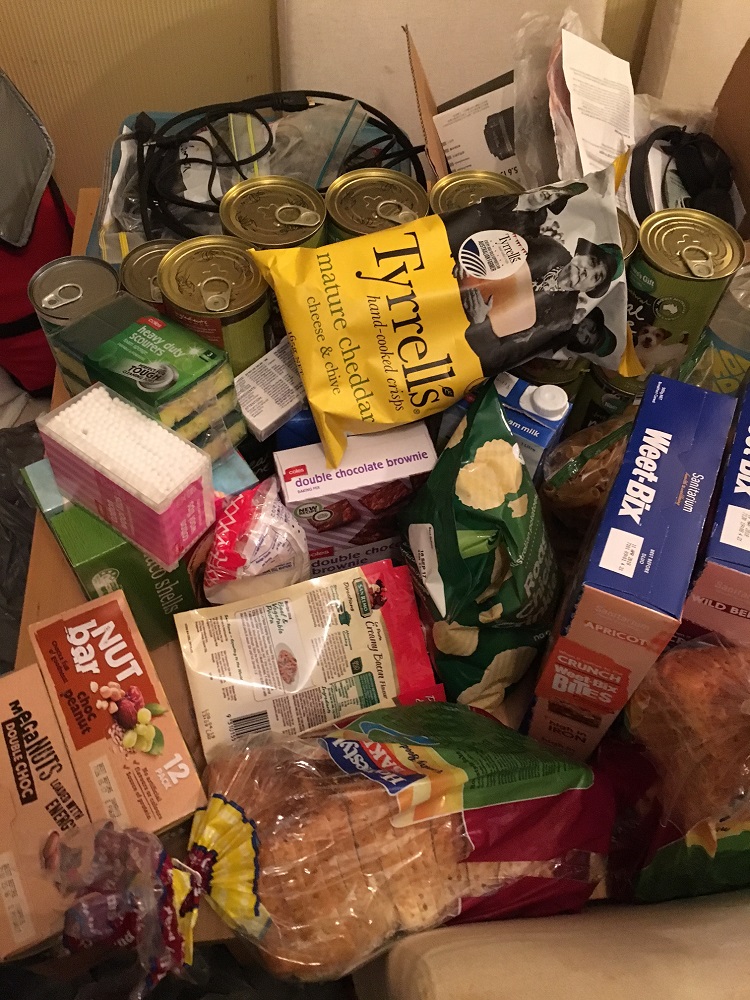 We figured we only needed a small pack of toilet paper to tide us over, as we had a newly opened big pack. But the 12 pack was $9 and so was the 24 pack. So yeah, retail makes soooo much sense #sarcasm 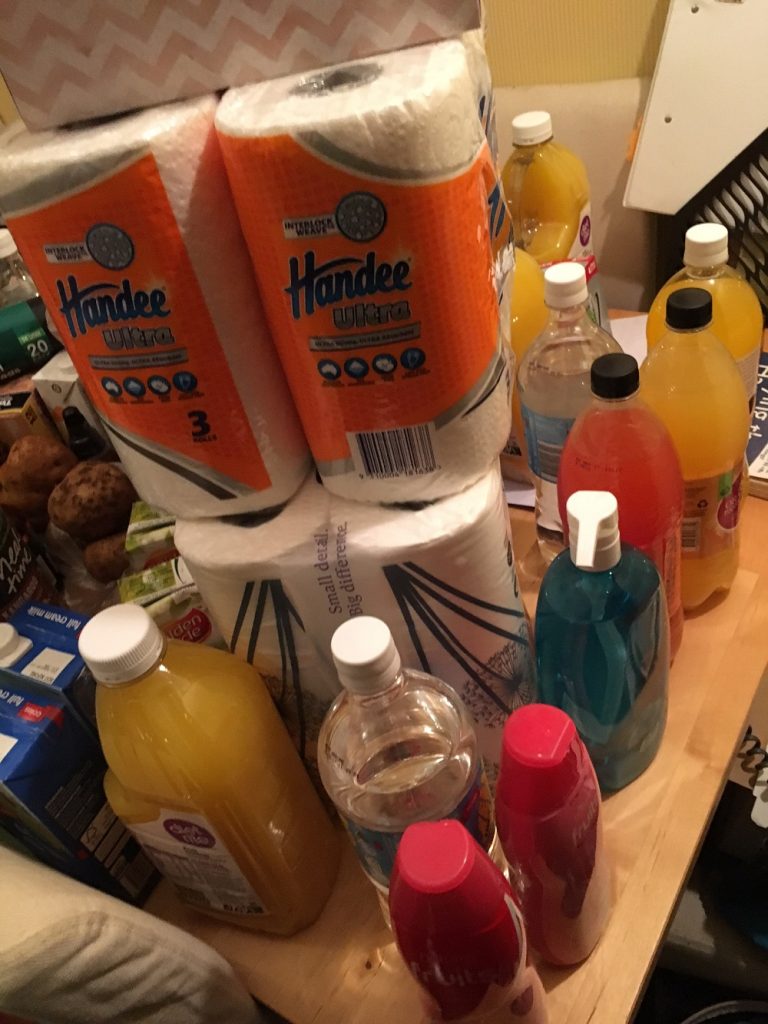 While a normal diet is expected within 4 hours of surgery, I’m paranoid about not being able to eat much. And while I’m not a massive ice cream fan, I do like the Coles brownie one. So I bought a few, just in case. It has been helping a bit at night recently. If I get sore near bed time, I have a few bites and it cools my throat off enough to avoid a dose of painkillers. 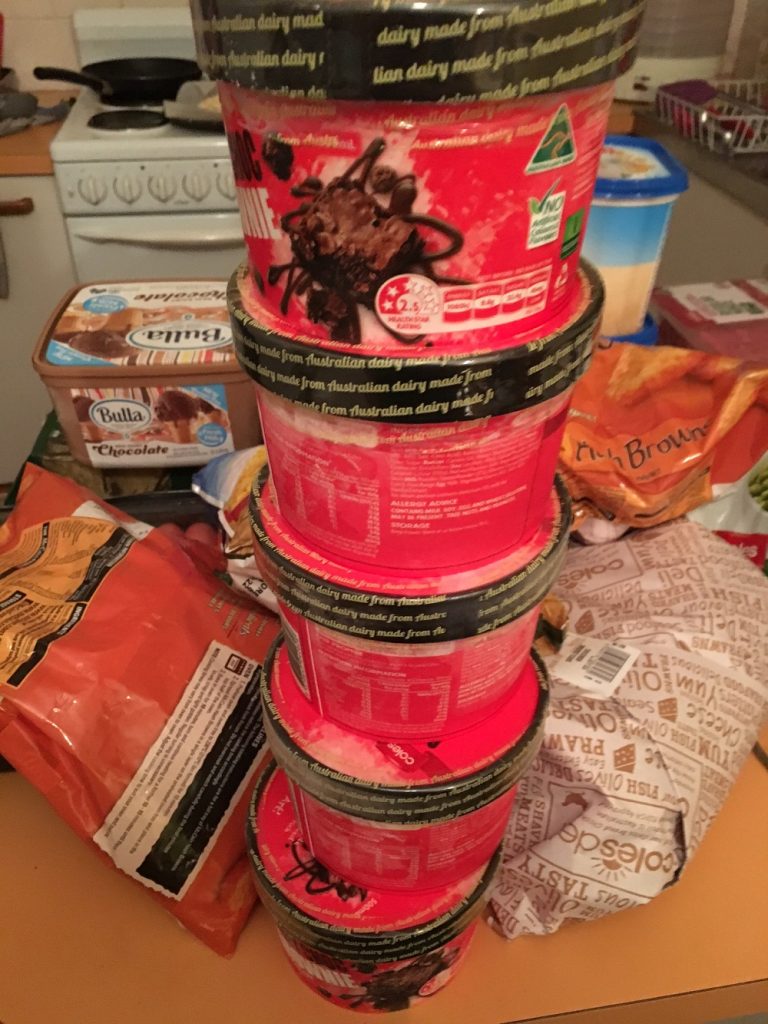 And last, but very far from least, we have a stash of general meat and frozen stuff and lazy meals. We always have lazy meals on hand (see the chicken nuggets? That’s what I’m talking about!). It’s so much cheaper to know that some time during a fortnight you’ll have a CBF to cook moment and need to just be able to throw something in the oven. $4 for that ahead of time is much better than $10 or $20 of takeout. 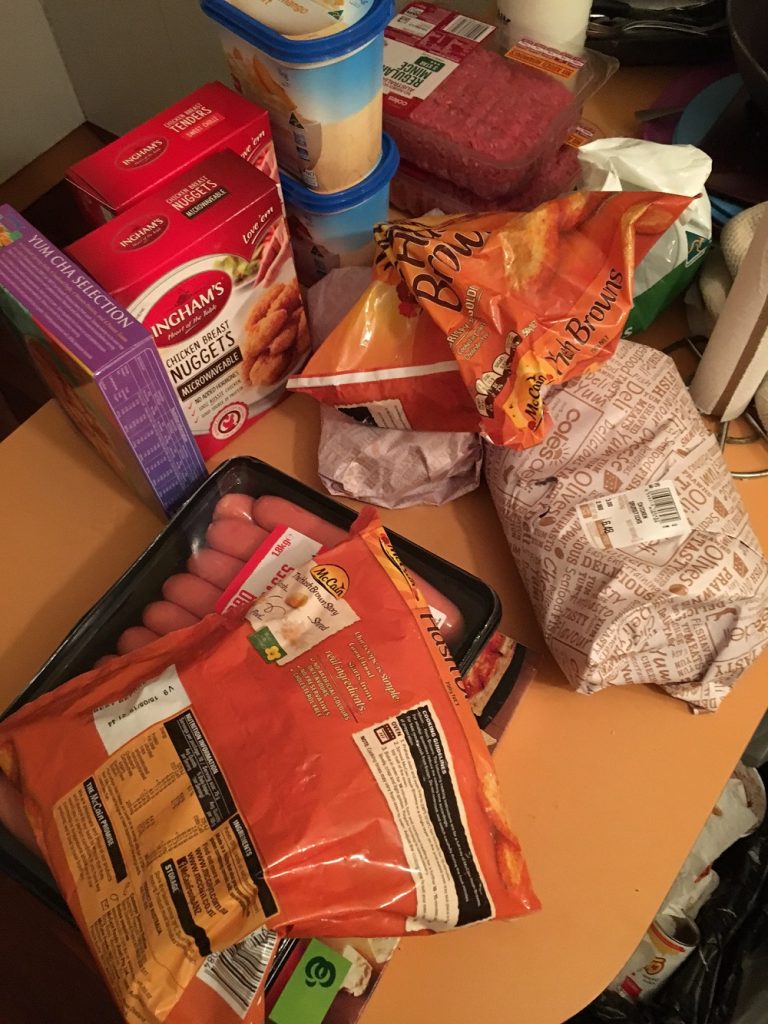 We’ve also stocked up on insulin needles for the dog and probiotics for me (cos I’m still living on antibiotics). I think we’re pretty much set now. Gulp. While I can gulp, I guess.

Now as much as we can do is prepped so it’s just today and part of tomorrow at work, then up to the hospital early Saturday morning for the big snip.

Have you ever had to do a massive stock shop? How much do you spend per week or fortnight on groceries?

14 Replies to “The Stock Shop”