It has been a while since I’ve done any of my grocery posts on here. Mostly because I tend to buy the same(ish) stuff each fortnight, I’m not prescriptive in “teaching” you want to do like a “real” shopping and meal planning blog (plus I don’t meal plan or follow receipes because ugh who lives a boring life like that – it’s all in my head) … but basically I think adults can look at these things, learn what they want, and take what works for you.

I called this a stock shop because I got hammered by bills in the past month, so my previous few grocery shops were scrimping and emptying the freezer of stock (stocks of food, not stock as in the stuff you make from bones, although I have that in there too) kind of fortnights. One of them was very cheap because I managed to use about $40 of flybuys points to make it even cheaper. This wasn’t a massive stock shop like before I had my tonsils out though!

Now that I’m back to only regular bills (um, yay?) I could buy more food again. And that is a yay. We spent $59 in Woolies. The $5 weirdly named stuff are museli bars. We don’t like to buy too much prepackaged food but they’re so hand for stuffing in a bag on the weekend or if Ben has a blood sugar low(ish) between meals; too handy not to have. We buy two packs per fortnight and that’s $10 total. My favourite frozen pizzas were also on sale so I grabbed three. I’m a big fan of having lazy food on hand in the house because it’s much cheaper than buying takeout when one or both of you don’t want to cook. Could you get takeout to feed two people for $5? I think not. (If you can, tell me how!) Does anyone not have lazy nights when you don’t want to cook? 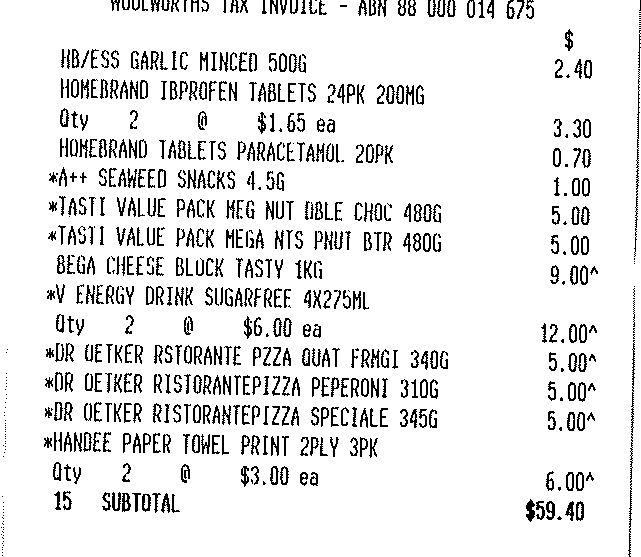 I tend to do the bulk of my shopping at Coles as I find it cheaper than Woolies. Milk and dog food are the bulkiest things we buy in Coles. Our dog is a Type 1 Diabetic so we do not ever vary what she is fed, not even flavours within the same brand. I don’t like to get veggies at supermarkets but I tend to be ok with buying potatoes, carrots and onions there as I figure they are harder to stuff up than more “delicate” veggies. I have no idea if veggies being delicate is even a thing but it is in my mind, so there you go! A chunk of our money went on fish, minced beef, chicken drumsticks and chicken breast. We were pretty much out of all meat after avoiding buying it for a few shops and it was time to get some more in the freezer. 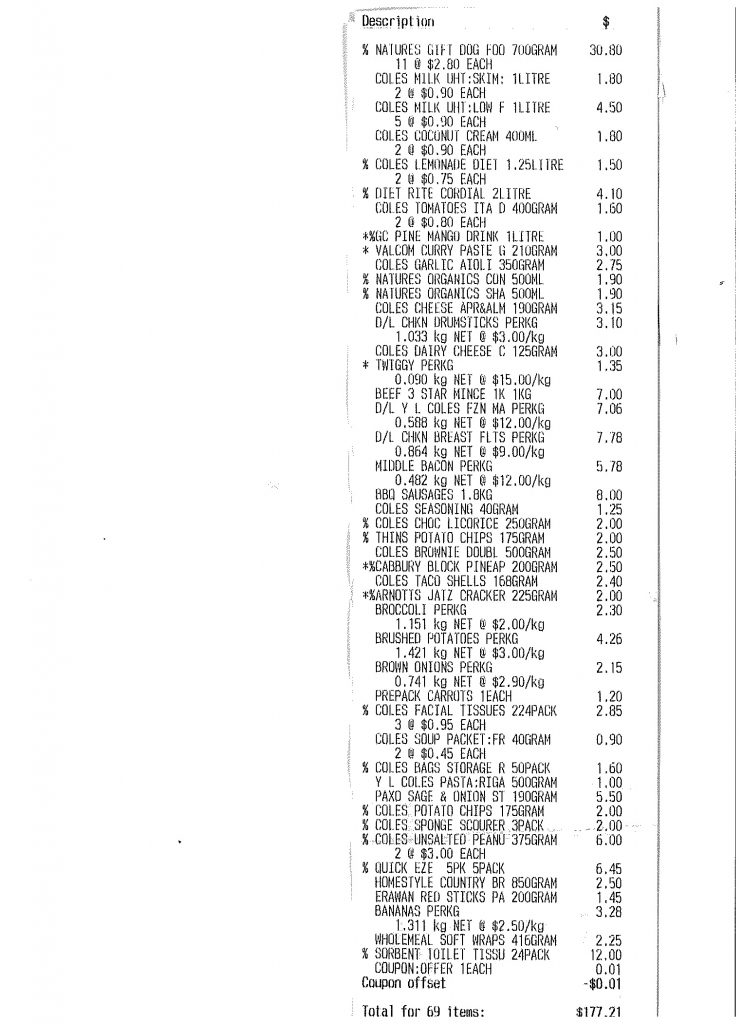 I am for $200 per fortnight for all groceries. This includes dog food, cleaning and general household items. We went a bit over this fortnight but after a few shops of going under, that’s fine by me. We will also get more veggies either from the awesome little veggie shop by our house or from the markets on the weekend. Tends to be about $10-20 depending on what they have, what we feel like and what’s in season. I’m actually a bit cranky at both the corner store and markets as they’ve started pre-packing veggies and I just like to buy the amount I want, not what they want, so I’m a bit torn on where to do the shopping. I guess it saves them time and queues in scanning vs weighing but I’m not a fan.

How much do you spend on groceries? Do you have a strict budget or a more general guideline like me?

18 Replies to “Stock Up Grocery Shop”